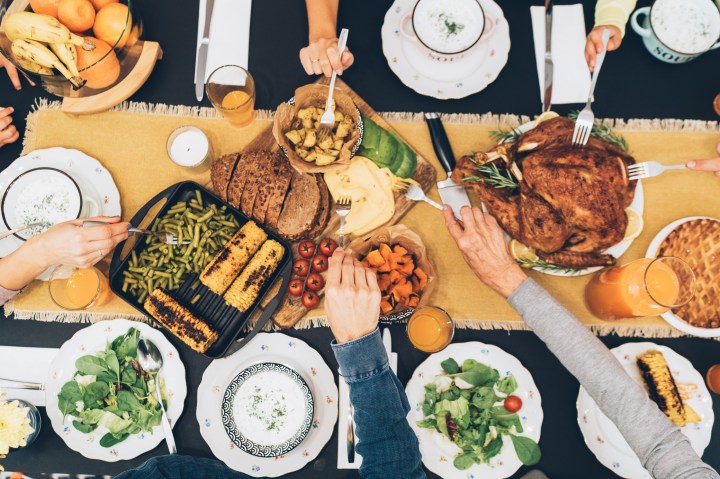 There will be fewer big gatherings on Thanksgiving this year, as many Americans follow health officials' advice and spend the holiday with just their immediate family or by themselves. filadendron/Getty Images

There will be fewer big gatherings on Thanksgiving this year, as many Americans follow health officials' advice and spend the holiday with just their immediate family or by themselves. filadendron/Getty Images

Every year, Dr. Michelle Starr and almost 30 other family members descend onto her grandmother’s house in Cape Cod, Massachusetts, to celebrate Thanksgiving.

It’s become a multiday affair, with family members renting out homes nearby and getting the chance to catch up, take walks on the beach and enjoy activities like puzzles.

Starr, a pediatrician, describes it as the most important family holiday. She’s only missed it two times in her entire life: once when she was pregnant, the other when she was a resident working overnight shifts. With COVID-19 cases rising across the country, this will be the third time.

“It’s a decision made in solidarity as a family. And we decided that we will sacrifice this year so that we can all be at the table next year,” Starr said. “This year, we are all staying home. And it’s really hard. And it being the right thing doesn’t make it any less hard.”

While many people are still traveling for Thanksgiving, despite warnings from health experts, some families have decided to forgo their holiday traditions in favor of more low-key celebrations. Many Americans will spend these special days alone or with immediate family, in some cases ordering takeout to help neighborhood restaurants.

Starr is celebrating the holiday at home in Zionsville, Indiana, with her husband and 2-year-old son. She said they’re supporting one of their local restaurants, Traders Point, by ordering a premade Thanksgiving meal.

With the restaurant industry facing massive layoffs and closures this year, ordering food can help keep them afloat.

Consumers are also affected by the stagnating economy, with a majority closely watching grocery prices, according to a survey from the data science company Dunnhumby.

Some grocers have decided to make their Thanksgiving offerings cheaper this year, like the discount supermarket chain Aldi, which is selling all the ingredients for an entire meal for under $30.

Others are marketing more gimmicky options, like turkey insurance in the case of Whole Foods. (Customers who purchased a turkey between November 11 and 22 can file a “claim” to receive a $35 Whole Foods gift card if it ends up overcooked, undercooked, burnt or dry.)

The average price of a Thanksgiving dinner is down 4% — the lowest it’s been since 2010, according to the American Farm Bureau Federation.

McKell Stewart, a 27-year-old from Salt Lake City, said that during this time of year, she typically meets up with family for pizza or Chinese food and also celebrates Friendsgiving — a tradition that started among her circle about four years ago.

“It’s just so much fun, because when you get together with friends, there’s not the pressure of drama or anything. No one’s going to ask you why you’re single. They already know you’re single,” Stewart said, laughing.

For Friendsgiving, Stewart said she would usually spend about $50 to $70 on items like side dishes and adult beverages.

But both of those events are now canceled. This year she’ll be alone and plans to go for a hike and maybe grab some takeout.

“I don’t think it’s actually hit yet. Right now, I’m like, it’ll be OK and I’m fine. But I’m almost wondering if on Thanksgiving, I’ll kind of get bummed out about it,” she said.

Stewart said that with the high number of coronavirus cases in Utah, she wants to do her part by avoiding social gatherings. On Monday, the state reported a weeklong average of 3,345 positive test results per day, which is a record high.

Toni Bacon, a 35-year-old resident of Atlanta, said that on Thanksgiving she usually travels to Baton Rouge, Louisiana. She has a cousin there who’s a caterer and owns a big hall where 92 family members congregate.

“It’s cousins, uncles, aunts, their kids, their grandkids and spouses,” she said. “So it’s a big, big deal in my family.”

At these gatherings, Bacon recalled, she would get to catch up with her uncle, who passed away a few years ago.

“He was like a second dad to me,” she said. “He was — he still is such a huge part of our family. He had a big personality, and he was just so much fun to hang out with and very supportive and loving.”

But because of the pandemic, Bacon said, her mom told her not to come.

Despite the disruption in plans, Bacon doesn’t anticipate it being a challenging day for her.

“What I’ve learned is that as you get older, it’s not about spending specific holidays with your family. It’s basically about spending what time you can and enjoying that time,” she said.

Bacon said she usually spends a few hundred dollars in airfare on Thanksgiving, while this year she might spend about $20. She’s planning to make turkey and cranberry sliders and pick up a pie when she’s at the market.

This Thursday, she’ll be relaxing by herself, along with her two cats, and watching TV.