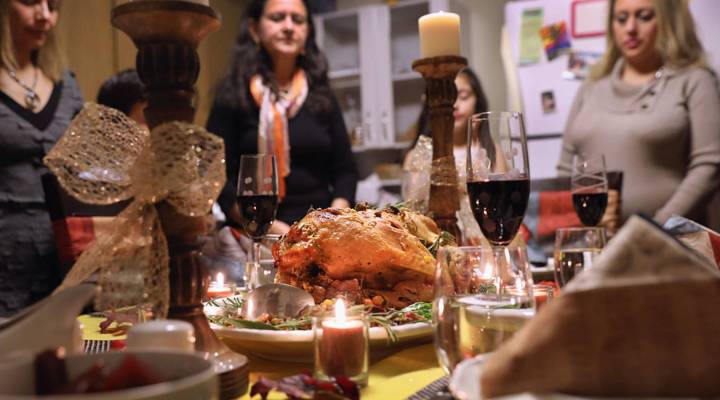 How much does that Thanksgiving feast cost? John Moore/Getty Images

How much does that Thanksgiving feast cost? John Moore/Getty Images

Thanksgiving dinner is cheaper this year — but you might not be feeling it.

Here’s the full shopping list, along with this year’s average prices:

Does this sound like your shopping list, or some kind of dream from yesteryear? Probably the latter, based on our own informal survey. We asked Marketplace listeners to guess the average cost of the feast, and most of them guessed several times what the Farm Bureau found.

Every year, the American Farm Bureau Federation rounds up the average cost of a Thanksgiving feast for 10. ? Without looking, care to guess the total?

Another survey of 1,000 adults from the loan company LendEDU found respondents were planning to spend  an average of $97.55 on non-travel Thanksgiving expenses. The discussion of that survey over on The Billfold found quite a few folks adding a Thanksgiving line item to their budgets this fall, indicating they might be penciling in more than $5 per person or so for dinner this holiday.

So what gives? First of all, the Farm Bureau makes it clear that while this is a feast, it’s a humble, no-frills feast. There’s no alcohol, for one thing. There’s also no organic, heritage birds. Some of the food is packaged, and there’s only one type of pie.

The 141 volunteers who complete the survey are instructed to shop around for the best price possible, the Farm Bureau says, and most shoppers should be able to do the same and get similar results. Thirty-nine states are represented in this year’s survey, and Farm Bureau deputy chief economist John Anderson told the “Today” show a couple years ago that its members mostly live in rural areas, doing their shopping at chains like Walmart, Kroger and Safeway. Shoppers in urban centers may have a harder time coming in under $50.