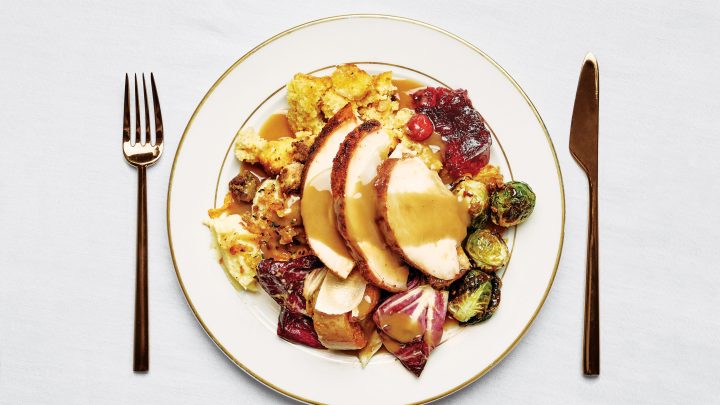 Thanksgiving dinner is hard enough to pull off when you’ve got to cook the meal for your family. But if you’re part of the test kitchen at a food magazine, there’s more to consider. That “new and different” dish can’t be too new or too different. Traditions must be upheld! Also, you’re probably planning all of this in June and July. Perfect weather for mashed potatoes.

This year, the staff at Bon Appétit found inspiration on YouTube. Their own YouTube channel, to be fair. In the past couple of years, the magazine has launched multiple web series about cooking, from Brad Leone’s “It’s Alive with Brad” to “Gourmet Makes” with Claire Saffitz. Focusing season two of their show “Making Perfect,” which involves tasking teams of Bon Appétit editors to test multiple recipes and cooking styles to find the absolute best, on Thanksgiving, was a no-brainer.

“These days, as you know, just to turn a profit, you can’t pick a lane. You have to be in multiple lanes at multiple times” said Adam Rapoport, Bon Appétit’s editor-in-chief.

Meanwhile, Rapoport has a few tips of his own to ensure the perfect Thanksgiving dinner.

Plan for at least one curve ball

Rapoport recommends keeping four traditional recipes everyone will love, but mix it up for that fifth dish.

Separate the dark meat and the white meat

“When it comes to turkey, the big roast turkey’s always a little underwhelming. The dark meat’s not quite done enough. The white meat’s kind of dry.” Asking your butcher to cut up the bird for you means you can cook each meat exactly right.

If you’re going to cook a whole bird, make sure you present it beautifully

See one of the eight covers of the November 2019 edition of Bon Appetit magazine for inspiration.

Use more stock in your stuffing

“I challenge anyone to tell me a time when the last time was they had a stuffing that was “too moist,”” Rapoport said.

Cranberry sauce should be raw

It’s the way Rapoport’s mom does it. “It’s bracing, it’s acidic, it’s tart, and it’s a nice sort of balance to all that rich, creamy, buttery, fatty stuff on your plate, which I love too.”

“It’s dinner. It is not lunch.” Enough said.