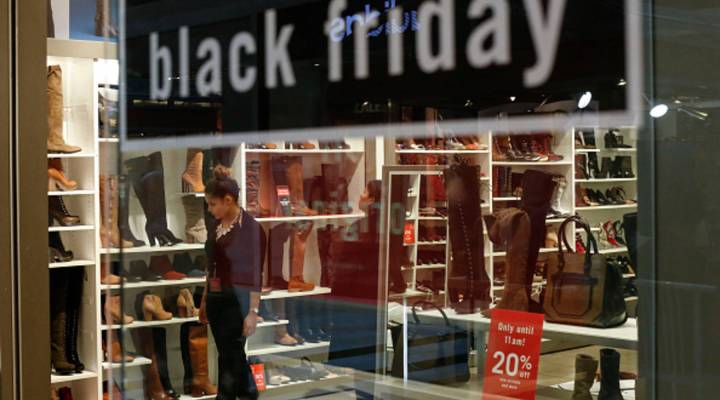 COPY
Black Friday and Cyber Monday are a few of the biggest shopping days of the year. Kena Betancur/Getty Images

Black Friday and Cyber Monday are a few of the biggest shopping days of the year. Kena Betancur/Getty Images
Listen Now

Arnold Cortez would love to spend Thanksgiving with his family eating his favorite dishes — sweet potatoes and stuffing — as well as the various pies that his wife bakes every year. However, just like the years before, he will be spending the holiday at work, stocking shelves at Walmart throughout the evening of Thanksgiving. The only Thanksgiving meal he will get to enjoy that Thursday evening is the one that the company usually orders from a nearby Golden Corral.

“Every year we have to work Thanksgiving,” said Cortez. He has been working at the Grand Prairie, Texas store for fifteen years and is used to celebrating Thanksgiving on Saturday or Sunday of the Thanksgiving weekend. His wife, Q, also works at the store as a stocker. She has four grown kids and thirteen grandchildren — all of whom attend the weekend celebration held at her ex-husband’s house. “If we didn’t work on Thanksgiving, we would be planning our own Thanksgiving dinner together and invite them over for once.”

For many retail workers, the traditional Thanksgiving dinner has been supplanted by Gray Thursday. In their attempts to attract more shoppers, over the past couple of years a number of stores decided to open their doors as early as 6 p.m. on Thanksgiving – stretching the Black Friday shopping holiday into Thursday. This year, Walmart will be open all day Thursday, with Black Friday deals starting at 6 p.m. Macy’s and Target will also be open on Thursday evening but will close for a few hours during the night before opening their doors again at 6 a.m on Friday.

About 32 million people are planning to do some shopping on Thanksgiving this year, according to a new survey by the National Retail Federation (NRF) and Prosper Insights & Analytics.

Despite that, there are some stores that are bucking the trend. REI, the outdoor equipment retailers, is not opening its stores on Thursday or on Black Friday — one of the biggest U.S. shopping holidays. For the third year in a row, REI will give all of its 12,000 full-time and part-time employees a paid day off on Black Friday. The employees are encouraged to spend the day outside with their family and friends.

“One of the sayings you hear around REI all the time is a life outside is a life well lived,” said Alex Jarman, general manager of the REI store in New York. “So being closed the day after Thanksgiving really is a no brainer for us. Spending time with our family on Thanksgiving and then having a chance to do that again and get outside, go hiking, go to a park, or whatever it might be, just seems like a very authentic thing to do for us.”

In addition to closing its stores, REI also closes its online call centers and its website.

“We will take orders online but there’s no one there to process them until Saturday,” explained Jarman.

More than 115 million people are planning to shop either in store or online or both on Black Friday this year, according to the NRF. But REI is not too worried about missing out on its share of the sales. Instead, the company hopes to use the holiday as a way to relax before the busy holiday season.

“We can all go out, relax and be really calm before we head into the holiday season that we know is going to be very strenuous and sometimes stressful. It gives us that chance to really catch our breath and get ready for the holidays,” said Jarman.

That’s exactly what Ace Hainley, a sales specialist at REI in West Des Moines, Iowa, plans to do. Hainley, 21, and her dad both work at the same REI and this will be their second year participating in the company’s #OptOutside campaign.

“Last Thanksgiving I actually went bike riding with my dad and we just kind of made a day of it,” said Hainley. “We brought some food along had a picnic in the park, biked along the amazing bike trails that we have here in Des Moines and spent some time with the family.”

They hope to repeat the experience this year. Getting Black Friday off is a welcomed change of pace for Hainley, who years prior worked at a mall coffee shop and had to work on Thanksgiving.

In fact, according to Jarman, having Thanksgiving and Black Friday off is one thing that attracts many potential job seekers to REI.

“Some of our employees actually have sought us out because they heard about opt outside,” he said. “Some of them have worked retail jobs where they actually had started to open on Thanksgiving. So it’s really been a great thing for our employees.”

While she might be working Thanksgiving this year, that has not always been the case for Karch Hooten. Over the past few years, she spent her Black Friday shifts on strike, protesting outside the store hoping to draw attention to Walmart workers’ wages.

She hopes that with stores offering holiday sales online and in-store days and even weeks before Black Friday rolls around, people will be less drawn to Gray Thursday and Black Friday offers in the future. Yet, despite that, shoppers keep turning up.

“We started our sales at six o’clock last year on Thanksgiving Day and people were there because of the great deal that they put out and advertised,” she said.