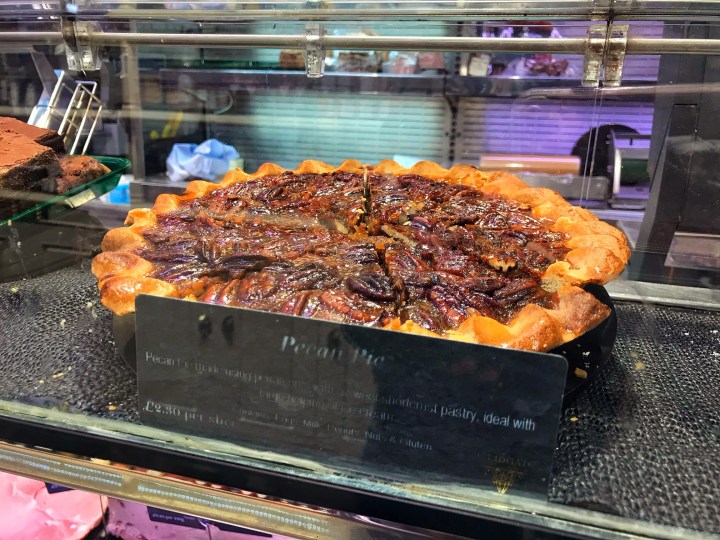 Cooks across America have been preparing for weeks for their annual Thanksgiving feasts.

While the holiday originated in the United States, it has found increasing fanfare in the U.K.

Many pubs in London now offer traditional Thanksgiving dinner, grocery stores stock displays of pureed pumpkin made for pie, and butcher shops are increasingly encouraging patrons to order their turkeys weeks in advance.

C. Lidgate is one shop that got in on the Thanksgiving craze early. For three decades, it’s been offering the whole feast: everything from the turkey right down to the cranberry sauce and pumpkin pie.

The BBC’s Victoria Craig spoke to Danny Lidgate, the fifth-generation butcher who runs C. Lidgate in central London. Below is an edited transcript of their conversation.

Danny Lidgate: We used to be quite close to the U.S. embassy, so we’ve always had quite a lot of U.S. customers. About 30 years now, we’ve been doing American Thanksgiving. We make our own pumpkin pies from organic pumpkins. We use really good, free-range, bronze turkeys. We do a range of stuffings and sausages, apple cakes, and pecan pies.

Victoria Craig: You said you’re close to the embassy, but what made you start to offer Thanksgiving meal components in the beginning?

Lidgate: It was really a request from a customer. And then we really started seeing a lot of American customers in Kensington, especially, and it seemed like an obvious thing for us to do.

Craig: How much do you sell every Thanksgiving?

Lidgate: Well, we sell a fair few hundred turkeys, which is quite good for an English butcher. We sell probably in the hundreds of pumpkin pies, as well. They’re pretty famous.

Craig: The Thanksgiving dinner that we Americans are very used to is a lot like the Christmas dinner that many British people enjoy. So when you’re talking about the supply chain and thinking about turkeys that you’re going to need for the end of the year, does offering Thanksgiving turkeys take away from your Christmas business, or have you figured out a way to balance it out?

Lidgate: No, what we actually find quite often is Americans who have been in London for a long time tend to celebrate Thanksgiving, but they also celebrate Christmas. So I think it’s actually part of the festive season.

Craig: Do you notice that British people are now catching on to the Thanksgiving tradition?

Craig: What is the most popular thing you sell around Thanksgiving?

Lidgate: Funnily enough, we do a pecan pie which is really, really popular. And we generally sell out of those.