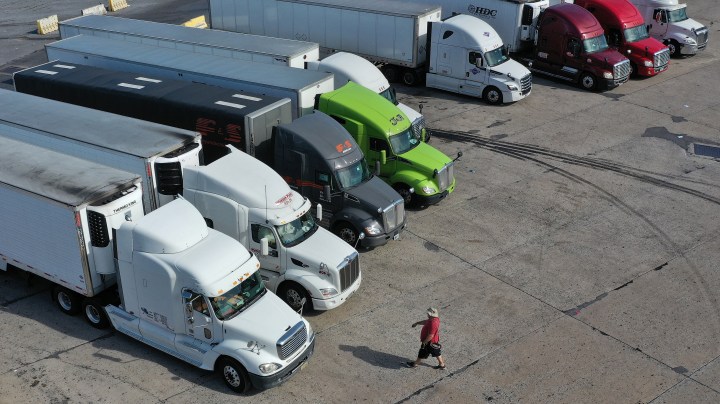 Supply chain slowdowns have underlined one thing we already knew: We need more truck drivers in this country. Trucking companies are trying to recruit with better pay and sign-on bonuses — some as high as $10,000.

Despite the incentives, not nearly enough people want to become truckers. Or if they do, they’re not in it for the long haul.

The bottom line is that driving a truck is hard, and the pandemic has only made it harder.

Unlike many truck drivers who have to spend weeks away from home, Josue Alvarez goes home every night. But lately because of the port slowdowns in Los Angeles and Long Beach, California, he’s stuck in his truck a lot.

“Couple of days, I was just sitting in the port just waiting for a chassis from 7 a.m. all the way to 5 p.m.,” Alvarez said.

He used to be able to make three trips a day to and from the ports. Now he’s lucky if he makes one. It’s stressful.

“If we don’t move enough loads a day, we don’t get paid enough,” Alvarez said.

And he learned the hard way the importance of packing a lunch. “Once you [are] in line, if you get out, you lose your spot,” he said.

In general, there are more restrictions on drivers these days, according to Zac Rogers at Colorado State University.

“It’s just a much less attractive job than it was before,” he said.

In some places, drivers can’t idle parked trucks at night because of air-quality concerns. “And I understand that,” Rogers said. “But you also don’t want to be sleeping in the bed of the truck in North Dakota in December and not be able to turn the heat on.”

Another frustration for drivers? “There’s a shortage of parking,” said George Ball, who carries loads of things like steel rods.

Ball has to find parking at the end of a 14-hour drive, and if one truck stop is full, he’s out of luck. He particularly dreads Dallas.

“You have to go out about maybe 60 to 80 miles outside of Dallas just to be able to find a parking spot,” he said.

Ball said he’s hoping to start his own trucking company, so he can work on his own terms.