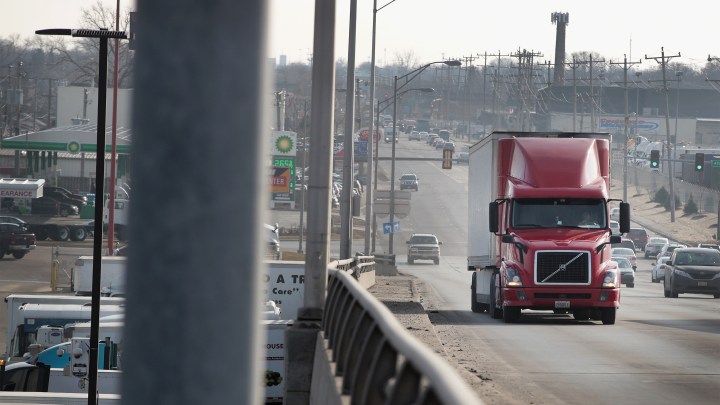 COPY
The global COVID-19 pandemic has only made it harder to fill a truck driver shortage. Scott Olson/Getty Images
COVID-19

The global COVID-19 pandemic has only made it harder to fill a truck driver shortage. Scott Olson/Getty Images
Listen Now

There’s a shortage of big-rig truck drivers in the U.S. The trucking industry needed tens of thousands of drivers even before the coronavirus hit.

And now, the industry’s worried that the pandemic is going to make that shortage even worse.

Dylan Francis, in Kansas City, Missouri, is ready to get out on the road. He has a job as a commercial truck driver waiting for him — once he gets his commercial driver’s license.

But the DMV is closed indefinitely.

DMVs are shut down in 27 states. And that’s not the only holdup for the trucking industry. Commercial driver training schools are also shut down.

Don Lefeve, CEO of the Commercial Vehicle Training Association, said he’s worried that when recovery efforts start, truck drivers will be needed more than ever. And there’s a big backup when it comes to training new drivers.

“You don’t flick a light switch and produce a driver overnight,” he said. “We’re talking upwards of three months to get a driver trained.”

“In some aspects of general freight, one driver can go in and out of a truck, and if you got a CDL and it’s the right class, you’re in business,” Novakovic said. “But in certain parts of the food industry, it’s not so straightforward.”

The Commercial Vehicle Training Association, along with several major trucking associations, has sent a letter to governors asking them to declare driving schools and DMVs essential services and reopen them.