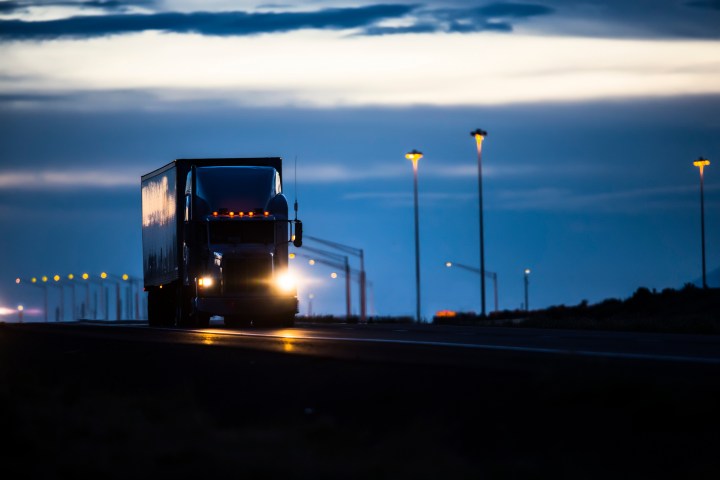 COPY
Now truck drivers can be added to the growing list of labor-related shortages. Getty Images

The U.S. is experiencing a shortage of truck drivers for a number of reasons, including harsh or frustrating work conditions, extremely long hours, insufficient pay and more.

The shortage is pretty real for Tra Williams, CEO of the truck driving school FleetForce based in Florida, who says companies have approached him in recent months, asking to connect with any new entry-level drivers he might know.

“America obviously needs a lot of drivers, it’s losing about 1,200 current drivers to retirement or exiting the industry in some other way every week,” Williams told Marketplace Morning Report host David Brancaccio in a recent interview.

“And the only way to really create a stop gap is to have new entry-level drivers,” Williams said.

Below is an edited transcript of their conversation on how serious this truck driver shortage is, Williams’ thoughts on ways to attract new talent and how he thinks current conditions of the truck driver “workplace” have improved.

David Brancaccio: So you’re getting the emails and the phone calls from companies that would like to hire more drivers if you could just mint some more of them?

Tra Williams: David, we are inundated with employers who are looking for entry-level drivers. America obviously needs a lot of drivers, it’s losing about 1,200 current drivers to retirement or exiting the industry in some other way every week. And the only way to really create a stop gap is to have new entry level drivers.

Brancaccio: So really retirements is a big part of this, just people getting older?

Williams: It is, 54% of the 1.1 million drivers that America needs over the next 10 years is driven by retiring, existing truckers.

Brancaccio: And so you’re trying to ramp up yourself to meet this higher demand?

Williams: We are, we are busting at the seams and expanding locations. We’re doing a lot of corporate contracts, wherein we train individuals for companies and employers who are looking for those who are interested in entering the industry. In fact, FleetForce in collaboration with the Florida Trucking Association has developed a program where aspiring drivers are matched with those potential employers who then provide scholarships to obtain their CDL, which is at no cost to the student.

Brancaccio: Yeah, the commercial driver’s license you’re talking about there. I mean, are you finding people interested? Because you have this perception or the world does that it’s really hard work or that it’s grimy work or that you get stuck in crummy truckstops all the time?

Williams: Well, I think in every industry, there are always poor work environments. And there are always employers who don’t realize that their frontline employees are their greatest asset. That’s true for the trucking industry and that’s true for every other industry. But there currently is a tidal wave of employers who really recognize what a crucial role that commercial drivers and professional drivers play in not just their business, but in the American economy. And as a result, they’re treating them accordingly. Compensation is on the rise as are benefits and work environment.

Brancaccio: Yes, some years ago, it’s been a while but we actually broadcast Marketplace, this program, from a nice truckstop in the middle of America and it was pretty high end. The restaurant was great, it was clean. There were husband and wife driver pairs, seemingly quite comfortable. It was not what – I gotta tell you – I expected.

Williams: Absolutely, I think there’s a lifestyle that you have to be attracted to, in order to go over the road. But we do train a lot of couples, we have a lot of man/wife, a lot of partners who come through and get their commercial driver’s license at FleetForce, and then they see the country together and work together.

Brancaccio: Yeah. And you know, often though, you do sleep in the truck and those accommodations, what was I hearing? Those are getting nicer?

Williams: Wow, so new trucks are pretty nice. The sleeper cabins are like a decent hotel room these days. And while certainly there is one person in the sleeper while another person is driving, I think that those who are attracted to the freedom and the autonomy that that career offers, I really find that to be more comfortable than perhaps what it’s been in the past.

Brancaccio: Yeah, I suppose we should remind ourselves, I don’t need to remind you that a lot of the commercial driving jobs may not be long distance, it might be local?

Williams: No, in fact, David, it’s the opposite. With Florida being the third most populous state, the fastest growing, we have an enormous amount of local and regional jobs where folks are home either every night or two or three times a week. And those are not what we would consider traditional over the road jobs but are also highly compensated.

Brancaccio: But let’s talk about what you get paid for this kind of work and then graph that across how much training you need. What could one expect if they took you up on the offer and got trained up?

Williams: So I love answering this question. And every time I do, I have someone who’s being under compensated contact us. And I hope that’s the case this time, because the average compensation for a commercial driver in the state of Florida is about $78,000 a year. Now, there are going to be those who hear me say that and say there’s just no way I can make that money. And for those, I’d love for them to reach out to us and allow us to connect them with employers who are compensating drivers what they’re worth and treating them like they’re their greatest asset. Now, obviously some folks are making more than others depending on the type of load you’re hauling and the distance and the time that you’re putting in but that average has been on the rise for the past 10 years.

Williams: The entry level drivers are not entering the industry at that point. Most of our graduates are entering with two or three job offers after their training is complete, somewhere in the $50,000 to $65,000 range. They make up to that $78,000 average after a few years of experience which is true for any industry as well. But even the entry level folks number is rising. There are signing bonuses, there are fantastic benefits being offered, there’s much more of a robust compensation package than maybe what traditionally, the industry had offered.

Brancaccio: But Tre, how long does it take to get trained up?

Williams: Well, it’s important to note that FleetForce is a school, not a trucking company. So it’s our job to prepare you to take and pass the commercial driver’s license exam. That takes four weeks, it takes 160 hours of time. And at that point, I would like to make sure to say you are licensed, but you must definitely need more training. And most employers have what’s called a finishing program, where you’ll spend 10 weeks, 12 weeks with an experienced driver on the road, to ensure that you understand the nuances of what life on the road looks like. So the training itself is about four to five weeks. But then once you’re employed, there’s another 10 or 12 weeks on the other side with an experienced driver.

Brancaccio: Even with supplemental experience that you might need, it’s not four years, it’s not like getting an undergraduate degree?

Williams: No, sir. And in fact, there’s, I can’t think of another industry where you can train for four or five weeks and have a job offer for $50,000 to $65,000 a year. In Florida, the average CDL compensation is roughly double what college graduates are being offered an entry level jobs right now.

Brancaccio: What are your thoughts about the safety of the career? I mean, it is – trucking – is a job where if you take a look on the OSHA website, there’s a higher risk than some other occupations.

Williams: Well, the newer trucks have all of the bells and whistles that modern cars have with accident avoidance and notifications. I think that the job gets safer every year. And I think it’s appropriately measured by (the Federal Motor Carrier Safety Administration) so that drivers aren’t spending too long on the road or being overworked and putting themselves in a less safe scenario. I think that there’s some inherent risks with any profession that is on our highways, just like there’s an inherent risk of being on our highways period. But overall, the industry is becoming safer. And I think the best employers are paying attention to those metrics. As you know, their safety is what’s driving their insurance premiums and they want to protect their people and protect their bottom line.