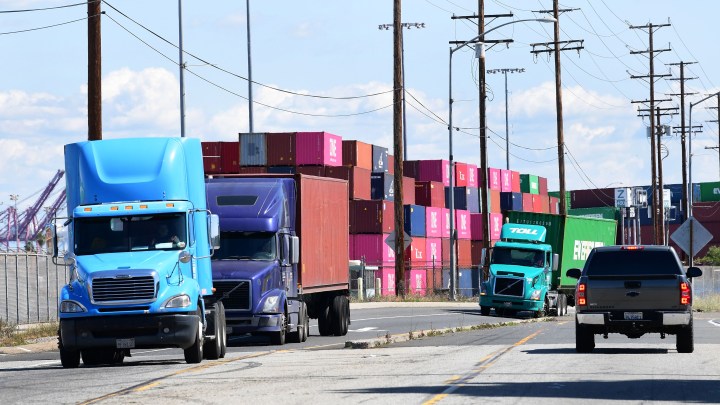 COPY
Trucks drive past stacked containers at the Port of Los Angeles. The industry is having problems recruiting and retaining enough qualified drivers. Frederic J. Brown/AFP via Getty Images

Trucks drive past stacked containers at the Port of Los Angeles. The industry is having problems recruiting and retaining enough qualified drivers. Frederic J. Brown/AFP via Getty Images
Listen Now

For years, trucking companies have complained about a shortage of one type of very essential worker: truckers. There are many reasons, but 2020 brought another: drug testing. Or more specifically, how companies share those results among themselves.

“At one point we had 17 truckers. Now we’re down to nine,” said Mary Bohl, electronic logging device coordinator at Missouri-based Hettinger Trucking. “It’s not fun at all. We are really struggling to get people in here.”

Nationally speaking, part of the issue is demographics. “Truck drivers in general are older than the general working population, so there are more of them retiring,” said Sean Garney, vice president of Scopelitis Transportation Consulting.

Finding new drivers can be a challenge. You have to be 21 to get a commercial driver’s license, and by that age people have invested in other careers.

Bob Costello, chief economist with the American Trucking Associations, said the pandemic made things worse because “you can’t train as many new drivers to the industry. When you talk to truck driver training schools, they have trained 20 to 50% fewer drivers in 2020 than they did in 2019.”

On top of these factors this year are drug tests. The Federal Motor Carrier Safety Administration drug and alcohol clearinghouse went into effect Jan. 6, 2020. It allows trucking companies to access drug test results for drivers nationwide. So a driver who fails a test in one state can’t just go drive in another.

Tens of thousands of drivers have been disqualified, reducing the supply of truckers by up to 2.5%, Garney estimates. “It’s hard to deny the fact that 47,000 drivers are ineligible to operate a commercial vehicle since the beginning of the clearinghouse,” he said. “But making sure drivers who should be ineligible aren’t driving is a good thing.”

Half of the violations are for marijuana — a drug that is legal or tolerated in many states but is a controlled substance at the federal level.

“The use of marijuana among drivers presents a real dilemma because we don’t have a test that can measure impairment like we do for alcohol,” said Lamont Byrd, director of the Teamsters’ safety and health department. “So the drug or its metabolites … hang around for days, weeks and sometimes longer periods of time, so you don’t know from a test perspective if a person is actually impaired. So to err on the side of caution, its use is prohibited.”

Bohl, with Hettinger Shipping, has seen the system put off some drivers.

“We’ve had some who’ve said yes until they found out about having to register with the drug and alcohol clearinghouse, and they didn’t want to do that,” she said.

Of course, one consequence of high demand for truckers could be better pay.