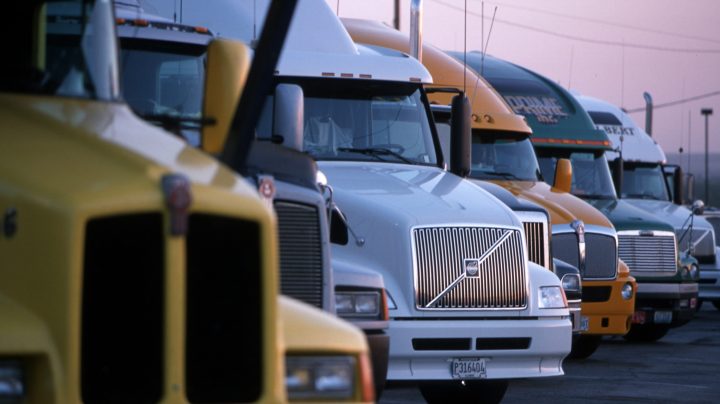 The American trucking industry moves a huge part of the nation’s freight each year. Trucks moved over 10 billion tons of freight in 2020 accounting for 72.5% of domestic tonnage that year, according to the American Trucking Associations. Some drivers during the pandemic saw lucrative pay rises from companies trying to combat supply chain difficulties — Walmart in April raised its starting salaries for long-haul drivers to up to $110,000, among the highest rates in the nation.

However, the industry’s recent boom may soon come to an end. Lewie Pugh is a former truck driver of over 20 years and executive vice president of the Owner-Operator Independent Driver Association. He said, “With inflation starting to rise and the economy slowing some, the worm is turning now with the price of fuel and stuff.” In addition, Pugh says that drivers being paid through the spot market, which uses market prices to determine compensation instead of pre-determined contracts, are seeing lower pay.

“Marketplace Morning Report” host David Brancaccio checked in with Pugh about the latest in the trucking industry, including how drivers are dealing with high gas prices and why turnover is so high among truckers. The following is an edited transcript of their conversation:

David Brancaccio: So the economy surged coming out of the depths of COVID. And there was a surge in hiring for truck drivers. I’ve seen these offers of pay for people who drive for the bigger companies, they were seen to be getting sweeter by the day. How’s it going now, from your perspective, as we get into high summer?

Lewie Pugh: Well, you are correct, it did surge, and truckers probably over the last year and a half since the first glut of COVID, when it first hit, have probably in most reports made more than they’ve ever made. Of course, with inflation starting to rise and the economy slowing some, the worm is turning now with the price of fuel and stuff. And yeah, as far as drivers, some carriers have upped their game, upped their ante, per se. We still think they need to put a lot more. Driver salaries, especially, have not kept up with inflation since the 1970s. If they had, truck drivers will be making six figures easily by now and most are not. The vast majority are not and a lot of the pay, it seems really good until you dig down into it and realize how many hours a trucker really works per week: about a 70 to an 80-hour work week.

Brancaccio: Yeah, 70 to 80 hours. And so the salary, you have to kind of prorate that in your head when you’re hearing about the salaries. Let’s talk about what I see at the pump here. When I stop at one of the diesel truck places and I look at what people are paying for diesel, I don’t know how they can make it. But I want to understand how it works. Why can’t the independent truck driver just pass along those fuel costs to the customer and say, “Here’s the fuel surcharge, you eat it not me?”

Pugh: Well, some can. A lot of it depends on kind of how your business is operating, how you’re set up. In trucking, we have what they call brokers, which work as an intermediary between shippers and truckers. Usually, the broker has the contract with the shipper or receiver. They look for a truck and they bid that out to usually whoever they can get to haul it for at least amount. When you deal with brokers and stuff, it’s a lot of times it’s harder to get that fuel surcharge, especially if they’re an area where they know there’s a low volume of freight, the broker may get a fuel surcharge, they may have a surcharge in that contract, but they don’t have to pass it along. There’s no regulation or law saying they do. Now if you’re an owner-operator, which is what we try to get guys to do, and push for guys to do, who have your own contracts with your own shippers and receivers. A lot of times you, they, have that fuel surcharge worked into their agreement. And then also there’s a third case here where owner-operators are leased to a bigger trucking company. And a lot of those companies pass the fuel surcharge along as they get it but a lot don’t as well. So it just sort of depends on the nature of your business and how your business is set up.

Brancaccio: Let’s get back to this point that you made about maybe the worm is turning now. There’s a lot of people trying to figure out if what the central bankers are doing the Fed with higher interest rates is beginning to slow growth in the economy because that is the plan. That’s what they’re trying to do to wipe out inflation. Do you think the truckers are beginning to see that we’ve come down the other side from the boom? Or is it still running pretty hot?

Pugh: Yeah, especially the guys we were talking about before. You call it the spot market—the people use the brokers—the spot market. Those guys are already starting to see it. We’re hearing lots of guys calling in here with a lot lower rates on the spot market. And my experience is almost 25 years of owning my own truck and being in the business. It seems like truckers are a good barometer of the economy because usually you feel the economy getting worse before anybody else really does, and then you feel the economy start to get better before anyone else does. Just gotta think because they’re kind of out there on the front line and in the shipping chain and in [the] supply chain. But yes. Now, contract rates to guys who have their own contracts with shippers and receivers directly. Their rates are staying steady, and they seem to be doing just fine right now. But what we usually see is when the spot market starts to drop, as they drop, people start looking for other things to do, which will then entail that this drop in the market will spin over into the contract phrase because guys will try to go in and undercut the rates and get a contract for less than what the guy that has the contract now has.

Brancaccio: So in the spot market for this, you’re seeing a little bit of slowing here?

Pugh: Yeah, we’re seeing quite a bit of slowing in the spot market. Other places that we watch organizations who really keep an eye on this stuff, they’re all showing downing trends in the spot market rate as well. I think probably it’s kind of a twofold thing. One, with the economy slowing that’s going to make the spot market go down just naturally, but also I think with trucking being so high, sometimes [for] brokers their contracts are for less than what they can get stuff moved for. I think that’s kind of what we saw after COVID, the first glut and COVID. And so brokers were taking out of their own pocket to get help get their freight moved. And so they’re probably trying to gain some of their losses back.

Brancaccio: And here’s something separate I want to ask you about, it’s something people may not fully appreciate about your industry: turnover among drivers. Very high in that industry, right?

Pugh: Last I looked, I think, is 94%, 95% turnover in the long-haul sector. Guys who run regional, your guys who work for LTL [Less Than Truckload] carriers, they don’t have a big turnover, but they have a better lifestyle, they’re usually paid better. So there’s not the turnover there. But in the long-haul sector, yes, we’ve heard for years and years of driver shortage and how there’s a huge driver shortage. We don’t agree with that. I don’t agree with that. There’s a huge turnover problem in the industry. There’s over 400,000 new CDLs [Commercial Drivers License] issued every single solitary year. But guys come into this industry, and like we talked about in the beginning, the pay and everything sounds really good until you come into the industry and see how long you have to work. You have a lot of time that you don’t get paid for. Detention time sitting at shippers or receivers that you never get repaid for. So you’re going away from home for 200-plus days a year. And it costs a lot of money to live on the road as well. So guys find out that this job really isn’t all that it’s cracked up to be so they leave and go somewhere else.