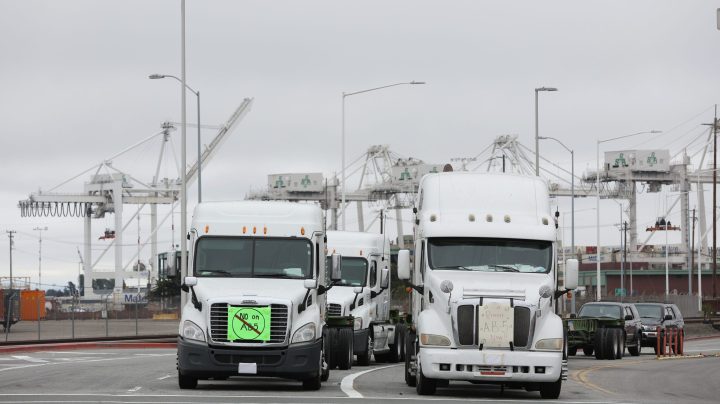 COPY
Frustrated truckers obstruct the Port of Oakland on Thursday, piling another burden onto the supply chain. Justin Sullivan/Getty Images

Truck drivers blocked entrance to the Port of Oakland this week, shutting down some operations, and the ports of L.A. and Long Beach saw smaller demonstrations last week. All were organized to protest a California labor law, AB 5, that has run afoul of independent truck drivers, of which there are about 70,000 in the state.

The law, passed in 2019, reclassified gig workers like truckers from independent contractors to employees to address disparities in benefits and pay. Enforcement in the trucking industry was held up over legal challenges, which the U.S. Supreme Court declined to advance last month. Now, many independent truckers fear it will undermine their way of doing business.

The disruptions add more weight onto a supply chain and an industry that have been under unprecedented pressure.

It’s been one thing after another for the supply chain, said Nick Vyas, a professor of operations management at the University of Southern California.

“Just when we’re thinking we’re done with the COVID, geopolitical conflict comes in, fuel prices, the inflation,” he said.

Now, a shakeup in the trucking industry — what he calls the heart of the supply chain.

“They’re truly the cardiovascular system that pulls the cargo from the terminal to the consumer,” Vyas said.

About a third of all jobs associated with West Coast ports are truck drivers of some sort, said John Martin, a transportation consultant. They move cargo at the port to warehouses and retailers.

“They’re absolutely critical,” said Martin. “Anything that causes disruption in the trucking business absolutely shuts down the efficient flow of goods.”

For decades, industry groups have complained of driver shortages. The American Trucking Associations said the shortfall hit an all-time high of 80,000 last year.

Lewie Pugh with the Owner-Operator Independent Drivers Association said there are plenty of new drivers. They just don’t stick around.

“There’s over 90% turnover rate in the long-haul trucker sector,” Pugh said. “We can’t keep people in this industry.”

Wages have increased, but, he said, they haven’t kept pace with inflation. And truckers don’t exactly work a 40-hour week.

“They work 70, they work 80 and he’s living on the road and away from his family, his friends, missing baseball games and, you know, dance recitals and all these things that we like to do with our children and our families,” Pugh said.

And supply chain slowdowns make the hours longer, he said. Drivers have to wait around to load and unload cargo and then race the clock to make their deliveries.