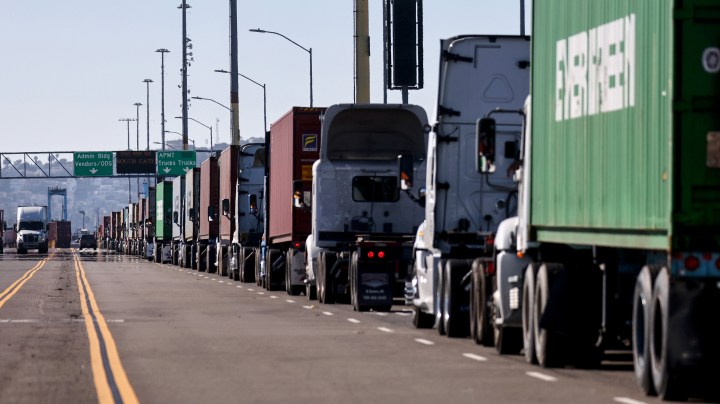 COPY
Addressing trucker wait times at warehouses and ports could alleviate some supply chain kinks and improve driver satisfaction. Above, trucks lined up at the Port of Los Angeles in November 2021. Mario Tama/Getty Images

Addressing trucker wait times at warehouses and ports could alleviate some supply chain kinks and improve driver satisfaction. Above, trucks lined up at the Port of Los Angeles in November 2021. Mario Tama/Getty Images
Listen Now

President Joe Biden wants more truckers. That was one take-away from an update the president gave on his Trucking Action Plan on Monday. The White House is pushing a pilot program that would allow 18-year-olds to drive big rigs and is trying to recruit more women into the industry.

The president also wants to cut down on something called “detention” — the time truckers spend waiting for warehouses and ports to load their vehicles with freight. But that may be more important to the nation’s supply chain woes than the number of drivers on the road.

Ideally, truckers get in and out of a warehouse or distribution center within a couple of hours. But even before COVID-19, detention often took much longer. Back when he was a long-haul driver in the 1970s, Todd Spencer came prepared.

“I read books by Alexander Solzhenitsyn, I read ‘Les Mis,'” he said.

An O. Henry short story wasn’t gonna cut it. Spencer is now the president of the Owner-Operator Independent Drivers Association.

This waiting time is a large contributor to trucker burnout, Spencer said. That time has become longer after COVID, and often truckers don’t get paid for it.

“It’s a monumental problem in terms of driver satisfaction. But in the bigger picture, it undermines the efficiency of our entire supply chain,” he said.

David Correll, a lecturer and research scientist at the MIT Center for Transportation and Logistics, agrees. According to his research, truck drivers on average spend only six and a half hours a day actually driving, well below the 11 hours they’re legally allowed.

A driver shortage may be kind of a misdiagnosis, he said.

“We could carry all the loads that we needed to carry with the drivers that we have if we just made better use of their time. And we do that by reducing how long it takes to load and unload,” Correll said.

The trucking industry acknowledges detention is a problem; it doesn’t want its trucks stuck at a warehouse for days on end. Plus, many fleets charge extra for slow shippers.

But it would help if there wasn’t a shortage of warehouse workers, too.