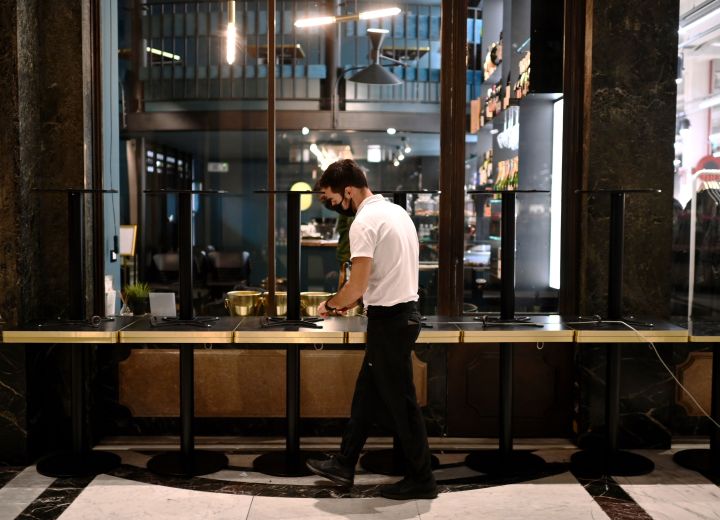 At a glance, much of the economy appears to be getting back to normal; restaurants brimming with diners and events at full capacity. At the same time, many small bars and restaurants are still grappling with damage caused by the pandemic. Casellula, a wine bar in New York City, reopens next week for the first time since it closed. “Marketplace” host Kai Ryssdal asked owner and general manager, Brian Keyser, about why he’s chosen to reopen at this time. The following is an edited transcript of their conversation.

Brian Keyser: Well, there’s some conflicting motivations. One, there’s a part of me that wants to get open as soon as possible. But our location is in Hell’s Kitchen. So we’re really reliant on theaters. And Midtown office workers. And those are two groups that are not back and I don’t think we’ll be until the fall.

Kai Ryssdal: Well, then you have to help me out with this, right? Because if you’re opening July one, but your customer base isn’t there, and Broadway comes back, I think, September early-ish. It’s gonna be a long couple of months, man.

Keyser: I am worried that it’s gonna be a long couple of months. And the thing that would make those couple of months survivable for us is the Restaurant Revitalization Fund, which I’m not confident that we are going to get until they add more money to the fund. And I’m really concerned that they’re not going to move fast enough for it to actually help us.

Ryssdal: Well, so let me ask you this. And look, I get this was really hard for you to work through. But why not just shut it down? When you realize you had to be closed the whole time? Why not just say, you know what, we’re not gonna make this work. And it’s a tragedy for me and my workers, and this is my dream, but I can’t have it now.

Keyser: I have to tell you, I decided to shut it down permanently multiple times over the last year. I have a good landlord so that with PPP money, some of which could go to rent, and with him making some compromises, we were able to keep stay in the space. And then when the RRF passed, then it was suddenly hope that OK, we’re going to get enough money that we can finally get reopened. So we keep getting hope. And then it keeps just … It feels like it’s just out of our grasp.

Ryssdal: How many people count on you for their employment? I mean, like, in the before times, how many people did you have working for you?

Ryssdal: And now, I’m sure, they are scattered to the wind. So you know, you got a week till you reopen. What are you going to do?

Keyser: Well, I’m very lucky and that my kitchen staff is either back or willing to come back. Waitstaff is a little harder. I’m doing things like adding touchless ordering, but that’s not really the way I want to run my business.

Ryssdal: Just because it’s in the conversation, are you raising pay or are you offering, you know, better pay than you were before?

Keyser: Yeah, I think restaurants have to. And, actually, the people that I’ve talked to in the business who are having trouble finding employees are the ones who are playing by the old rules. So my plan is to stop paying servers the sub minimum wage that’s allowed for tipped employees and spread tips amongst more of the staff, and hopefully be able to create a place where everybody’s making a living wage, and hopefully better than that. But it’s not going to be cheap.

Ryssdal: You got to plan B? I mean, you were making some plans during the pandemic, right?

Keyser: Yeah, back last fall when I was feeling that it was highly unlikely that the restaurant would get open again, I applied to several graduate schools in public health policy. And so, ironically, on the day that we found out that the Restaurant Revitalization Fund was oversubscribed, I also got accepted to Georgetown’s graduate school. So I had to defer. And so I’m still holding out hope that the SBA and Congress will act quickly and add more funds to the RRF. If they don’t act quickly, restaurants like mine are going to just run out of time.