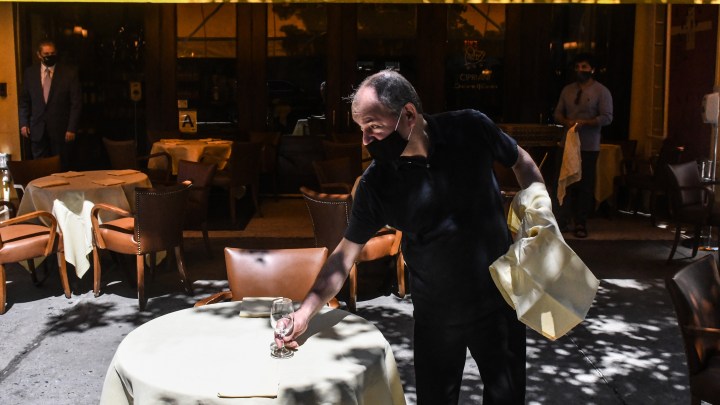 Judy Herrell is on a nationwide hunt for black raspberries.

“They’re just almost impossible to get,” she said. “So I called everybody I knew who could get them, and I’m probably patching together maybe a pallet?”

She can’t really go without them. Two of her top-selling treats at Herrell’s Ice Cream in Northampton, Massachusetts, use black raspberries. Of course, now the price of the fruit is up 45%. Sugar is up too, and she definitely can’t go without that. Same with cups and spoons. And soon, rent. Her landlord reduced it early in the pandemic but has been raising it incrementally.

Meanwhile, what’s not going up? Sales.

“People are still pretty scared, and a lot of these kids aren’t vaccinated yet,” Herrell said.

Her customers are mostly families. And so far, COVID vaccines are approved only for kids ages 12 and up.

Herrell actually got some money from the Restaurant Revitalization Fund. It helped her pay rent. But lots of business owners weren’t so lucky.

“There’s about $50 billion worth of applications right now that they aren’t going to be able to fund,” said Sean Kennedy, with the National Restaurant Association. He said the proposed $60 billion would cover those businesses plus others that didn’t get the chance to apply.

And with the labor shortage, Alex Susskind at the Cornell Institute for Food and Beverage Management said, the money could help businesses pay more to attract workers. His favorite local Mexican restaurant is only open for dinner now.

“And I asked the other day, I’m like, ‘Hey, when are you guys opening for lunch?’ And he goes, ‘Ahh, as soon as I can get a second shift hired,'” Susskind said.

Even if there’s an appetite for restaurants to get back to normal, there are still real challenges holding them back.