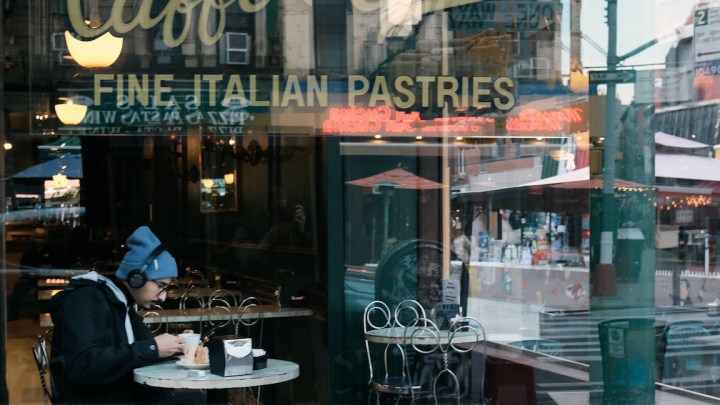 COPY
For many New York restaurants, whether office workers and tourists return is a key question. Spencer Platt/Getty Images

For many New York restaurants, whether office workers and tourists return is a key question. Spencer Platt/Getty Images
Listen Now

New York Mayor Bill de Blasio just announced that the city plans to allow all businesses — restaurants, bars, stores, stadiums, museums, theaters, etc. — to reopen at 100% capacity on July 1, pending state approval. But of course, it’s a little more complicated than that. Take restaurants, for instance. A lot of them rely on tourists and office workers. And who knows when or if they’re coming back?

Amish Market is a lunch spot in Midtown East, a neighborhood packed with office buildings. Chief Financial Officer Joseph Georges Eyenga has been keeping his ear to the ground. “From what I’m hearing around, a lot of companies are actually choosing to offer stay-home work,” he said. “And that is going to be a problem for us because we need people to be here.”

A lot of restaurants in New York are looking for indicators. They need a sense of what demand will be so they can plan.

“Every day, I look at the numbers,” said Melanie Frost, chief operating officer at Ess-a-Bagel in midtown. “I’ll look at what people are purchasing and what people seem to be interested in or hearing from the staff what people are calling about.”

For instance, are people still calling in a lot of delivery orders, or are more people showing up in person?

She’s noticed a small bump in business from hotels, which is a good sign.

Josh Kessler, executive chef at Barnea Bistro, a fine-dining restaurant in midtown, has his own way of crystal-balling.

“The best thing to do is to walk the streets,” he said. “That is New York City, you know. We’re a walking city. And what you see as a New Yorker is exactly what you get.”

Lately he does see more people out. But he said even if the demand is there, meeting it won’t be that simple.

“I can’t just open up my books on July 1st and say, ‘All right, we’re ready to open, and let’s now go full steam ahead,’” he said.

Kessler will need to hire more staff — servers and waiters and hosts and bartenders and cooks. And some of his staff have left New York or left the industry entirely.