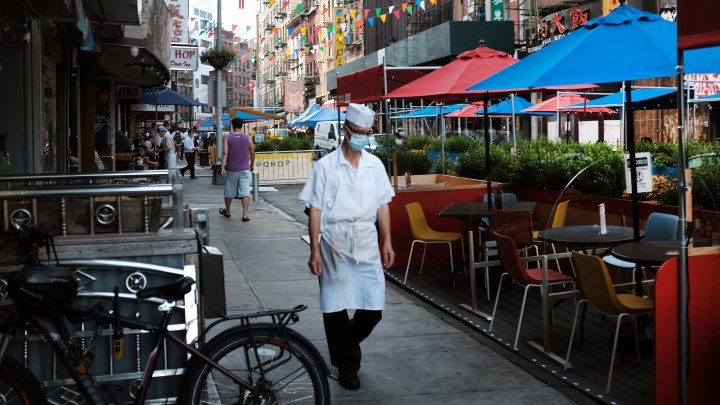 In a lot of cities, there are neighborhoods where hundreds of lunch places depend almost entirely on foot traffic from office workers. With those offices emptied out for the foreseeable future, business has slowed to a trickle.

I visited one of those neighborhoods recently — Midtown East in Manhattan — to see how that’s playing out.

I know the neighborhood well. It’s home to Marketplace’s New York bureau and many of my favorite lunch spots.

I got to the bureau around 1 p.m. I hadn’t been there in five months.

Upstairs, the calendar in the kitchen was set to March 2020. And there were all these vestiges of our former lives: a sweater on a chair. Dishes in the drying rack. A now-rotten orange on a desk.

I headed downstairs and across the street to my first stop: MacarOn Café, a French place that serves tea, sandwiches, and macarons.

The lights were off, and there was a sign on the door. The restaurant was closed — temporarily — because of the virus.

In the window was a display from Valentine’s Day: a giant heart made out of macarons with a sign underneath it that says “love,” surrounded by rose petals.

Looking around, it wasn’t a total ghost town. There were people walking in the street.

But Midtown East used to be packed — with tourists stopping to take photos of Grand Central or St. Patrick’s Cathedral, with office workers running late for a meeting and doing that iconic New York City power walk, and with lunch places that are not necessarily destination dining but feed you when you have an empty stomach and only 10 minutes before your next call.

“Nobody was expecting that something like this would happen in our life.”

I turned the corner onto 45th Street and saw a Halal cart.

Islam used to get 150 to 200 customers a day. He just reopened after five months and now he only gets 20 or 25. He’s actually losing money.

Just down the block, I found Tarek Abozeid sitting outside his restaurant, the Comfort Diner. It’s been around for almost 10 years and serves typical diner food: grilled cheese, burgers, and pancakes.

His rent is $20,000 a month, but he is only getting about five or six customers a day now.

“It’s really a disaster,” Abozeid said. “Nobody was expecting that something like this would happen in our life.”

Indoor dining is not allowed in New York City right now, so he set up a few tables on a platform in the street. No one was sitting there.

“We are just open just because we need to open,” he said. “Otherwise, people will have an idea that we are closed for good.”

He might close for good. He’s not sure he’ll make it through December.

I headed a few doors down to Amish Market, where I used to get lunch all time. They sell groceries and once had an extensive hot food bar. Every day, it was fresh salmon, asparagus, rice pilaf. Not anymore.

“We cannot leave food open anymore; we have to have it sealed,” said Joseph Georges Eyenga, the store manager. “And it becomes a little hard for the customer to see and fall in love with what is inside a container.”

Not that he has many customers right now. His sales have fallen by 45%.

“New York is being emptied out,” he said. “And you can feel it at the store level.”

Meanwhile, his rent is the same and the federal PPP loan the business got has run out.

I grabbed some packaged salmon and brown rice and checked out.

Being back in Midtown East made me wonder: where do these restaurants that have been such a big part of our lives fit in our new reality?

The truth is, they might not. It depends in part on how quickly life goes back to what it was — if that ever happens — and if these restaurants exist when it does.