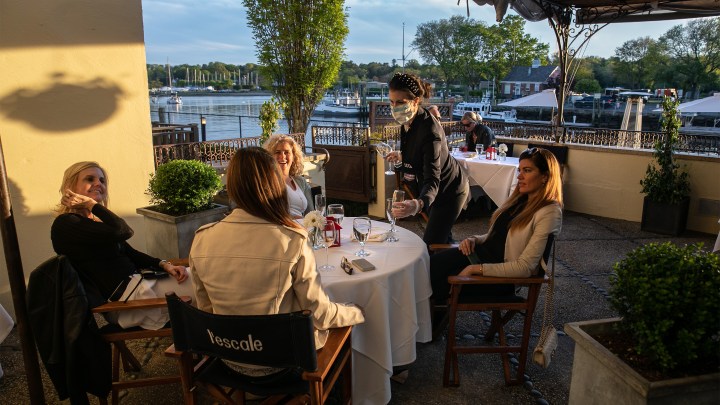 COPY
People dine on a restaurant patio in Connecticut in late May. Some people feel more comfortable dining outside at a restaurant but aren't ready to sit in a dining room yet. John Moore/Getty Images
COVID-19

People dine on a restaurant patio in Connecticut in late May. Some people feel more comfortable dining outside at a restaurant but aren't ready to sit in a dining room yet. John Moore/Getty Images
Listen Now

Georgia Gov. Brian Kemp has decided to lift many of the state’s remaining restrictions on stores and restaurants, even as Georgia’s coronavirus cases and hospitalizations continue to climb.

Meanwhile, other states are seeing a jump in cases, including Arizona, Texas, Florida and California. A month ago, I talked to folks around the country about whether they were willing to go back to stores and restaurants as they reopened. I checked back in to see how things have changed.

When I last talked to Collin Adams, who lives in Kingsport, Tennessee, he and his wife were not going out to restaurants. They’ve started to make exceptions — like for their 10th anniversary a couple weeks ago.

“We made sure we kind of went not during a peak time,” Adams said. “[We] kind of pulled into the parking lot and looked to see if there was a wait time or anything. It was actually very, very well done.”

It wasn’t crowded, and the servers were wearing masks.

“In the back of my mind the whole time was ‘should I be doing this?'” Adams said. “I won’t say it was the most enjoyable experience.”

In Nashville, Dana Franks said she isn’t going out much. It kind of depends on how careful she thinks the restaurant or store is being. She eats at a nearby Waffle House.

“They have put up shower curtains between the booths, which is kind of weird, but I guess it’s effective,” Franks said. “I feel safe as can be in there because they really do take a lot of care.”

She’s also gone to the shoe store and tried on some sandals. She’s not too worried about transmission through her feet.

Then there’s James Smith in Phoenix. His sister had the virus more than a month ago and she’s still recovering. He has eaten at one restaurant, outdoors. He’s not comfortable with sitting inside.

“We just saw notices from two restaurants saying, ‘We had somebody here with COVID, we’re going to close down,'” Smith said.

None of the folks I talked to said they’ve gone back to normal. They’re just not quite there yet.