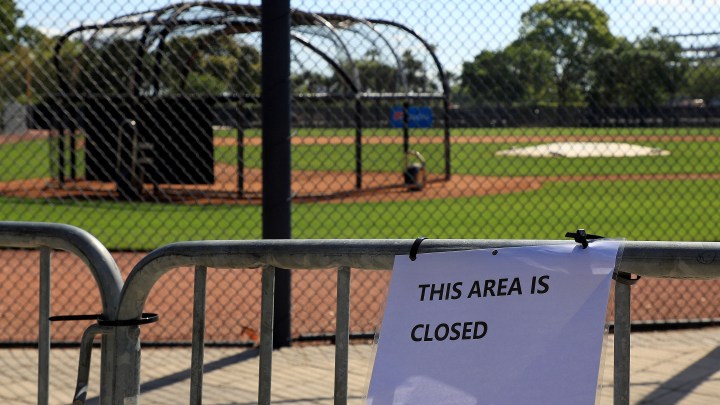 A shortened major league baseball season is scheduled to start at the end of this month, even though many players have voiced concern over doing so and have to decide if they, in fact, want to suit up.

Players in the minor leagues won’t have that option. Last week, minor league baseball canceled its season for the first time in its history.

Hannah Keyser, a national baseball writer at Yahoo! Sports, discussed what that means for the players and towns where these teams play with Marketplace’s Andy Uhler. The following is an edited transcript of their conversation.

Andy Uhler: For a lot of small towns, the minor league team is sort of the attraction, is sort of a thing, right? There are economic implications there not just for the players, but for everything that’s going on in the city, yeah?

Hannah Keyser: Yeah. So what’s interesting about minor league teams is that everything you’ve heard about Major League Baseball, and probably sort of all pro sports teams, and, “They make so much of their money from television rights deals, and, you know, ticket prices hardly even factor in” — that’s not true at a minor league level. Most minor league revenue is butts in seats, they make their money from having people attend games. And so more than half of these teams could go under, could become essentially bankrupt. And for that, you sort of have to understand how the finances work.

So minor league teams themselves are essentially small businesses. Somebody owns the team that’s located in Toledo. But the the way that they function economically is Major League Baseball pays the salaries of the players and the coaches and the staff, but they still do have all these other expenses. And these sort of local businesses are on the hook for things like ballpark leases, marketing costs, food and beverage supplies and then salaries and benefits for their permanent employees.

Uhler: Because those expenses, they don’t just go away.

Keyser: Right, exactly. Those are expenses that without any revenue this year from tickets, these mom and pop — essentially — minor league baseball teams can’t afford their rent. They can’t afford the upkeep on the ballpark.

Uhler: We’ve been talking about minor league contraction for a while now. And you’re telling me you think this is kind of a done deal?

Keyser: Yeah, so Major League Baseball has been looking to contract, the number of teams. There’s 160 teams, they want to cut 42, and this was a huge issue over the winter. And so what’s really interesting is Major League Baseball, as part of the pandemic negotiations, slashed the draft, like fully, from 40 rounds to five, so it does look like the minor leagues are going be smaller.

Uhler: The product on television if you’re watching Major League Baseball, does it change if we have a contraction? Or are we not going to notice it?

Keyser: I mean, that’s a really good question. Major League Baseball would tell you that you’re not going to notice it. Where you’ll feel it, if you’re sort of involved in baseball, really, there’s not a lot of jobs. Those effects will take a while to be felt, and probably you won’t notice them if you’re a casual fan. But people within the game are already concerned that, you know, it’s a shrinking of their industry, and that’s bad for people in the industry.