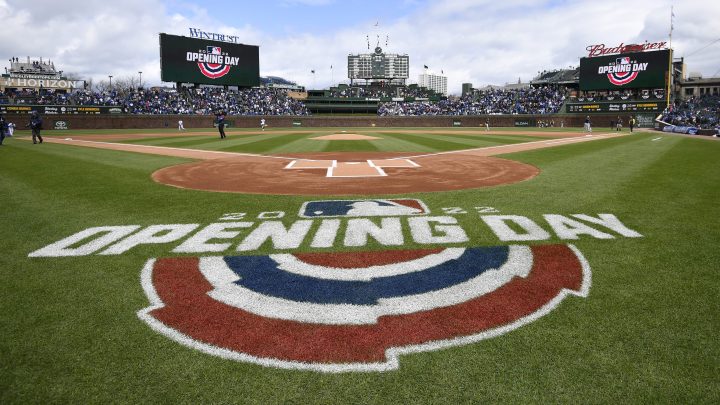 COPY
After a delayed start due to pay disputes, baseball is back. Quinn Harris/Getty Images

After a delayed start due to pay disputes, baseball is back. Quinn Harris/Getty Images
Listen Now

Major League Baseball’s opening day is Thursday — and team owners, players, and fans are all breathing a sigh of relief. Just last month, it seemed like we might not have a season at all.

For 99 days, owners and players had been locking horns over a new collective bargaining agreement. On March 10, they settled.

Some of the agreement is literally inside baseball. The two sides agreed to bring the designated hitter to the National League and add two more playoff spots.

Otherwise, said Michael Roach, a professor in the economics department at Middle Tennessee State University, this was a classic worker-versus-boss dispute.

“They were arguing about money, essentially,” he said.

Roach said the owners and players had to tackle a few big monetary issues. “One was the minimum salary that baseball players would earn,” he said.

“The other was a competitive balance tax threshold,” Roach added, commonly referred to as a luxury tax.

“Which is essentially the payroll level after which owners have to pay a surcharge, essentially a tax, on every dollar that they spend over that,” Roach said.

The Pittsburgh Pirates’ payroll was the lowest in the league at about $62 million, well under the threshold. Five teams’ payrolls came in right around the $210 million limit: Boston, Houston, both New York teams and Philadelphia. Only two teams exceeded it and paid the luxury tax: the San Diego Padres and the Los Angeles Dodgers. The Dodgers blew past it by more than $75 million and had to cough up more than $32 million in penalties.

The players wanted the threshold increased so that teams could spend more money on them before paying the “tax.” They won an increase of $20 million.

“This is about the players organizing to claw back some control and some influence and being paid, frankly, for territory that they feel like they lost over the previous two collective bargaining agreements, which span approximately 10 years,” said Marty Conway, who spent 15 years working in Major League Baseball and now teaches sports industry management at Georgetown University.

Major League Baseball’s revenues soared from $8.2 billion in 2015 to more than $10.7 billion in 2019. The players were negotiating for a bigger slice of a growing pie.

“Where roughly 10 to 12% are making $10 million or more, 71% of Major League Baseball players in the past full season made less than $1 million,” he said. “That’s a real large number of people who aren’t getting their cut of the revenues that they’re generating.”

And Major League Baseball is only going to generate more revenue in the near future.

For one, the new agreement gives franchises the right to sell sponsorship patches on jerseys and helmets in 2023.

“Traditionalists who really like the clean look of uniforms and are distracted by advertising are going to have to get used to that, eventually,” Baccellieri said.

On top of that, playoff expansion will reportedly result in another $85 million in TV revenue for the league.