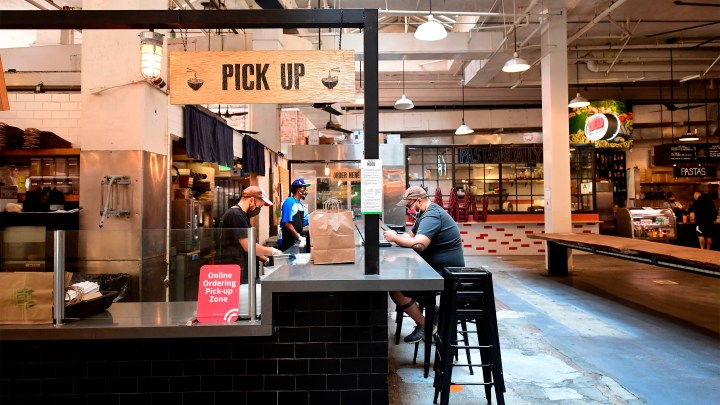 COPY
A man waits for his lunch order at a nearly empty restaurant at Grand Central Market in Los Angeles in June. Frederic J. Brown/AFP via Getty Images
COVID-19

A man waits for his lunch order at a nearly empty restaurant at Grand Central Market in Los Angeles in June. Frederic J. Brown/AFP via Getty Images
Listen Now

The restaurant industry has been hard hit by the pandemic.

Between the shutdowns, social distancing regulations and the economic crisis, a lot of restaurants say they are simply unable to pay their rent.

Lien Ta co-owns two restaurants in Los Angeles. Here’s Looking at You is in Koreatown, where her favorite dish is frogs legs. All Day Baby, in LA’s Silver Lake neighborhood, has a mean catfish sandwich, she said.

Early on in the pandemic, she had to transition to takeout and delivery, but “we just didn’t make any money,” she said.

Restaurants nationwide have seen their income decimated by the shutdowns. Alex Susskind, a professor of food and beverage management at Cornell University, predicts that 30% of restaurants may go out of business.

“Restaurants historically are very cash-flow dependent,” he said. “When you cut that off, restaurants that don’t have any reserves, or very low levels of reserves — it’s a huge issue for them.”

The NYC Hospitality Alliance recently found 80% of the city’s restaurants did not pay full rent in June.

“I think the federal government needs to come in with direct cash injections,” said Andrew Rigie, executive director of the alliance. “We need to deal with the rent issue.”

Back in Los Angeles, Ta decided to close her Koreatown restaurant for now. The landlord for that spot has forgiven her rent for the time being.

Her Silver Lake restaurant is still open for delivery and takeout. She said her landlord won’t renegotiate that rent, and she’s had to lay off 60 people.

She still can’t break even on the amount of business she is getting.

“There’s just not enough. So what are we going to do? We’re just going to wait until we get kicked out, I guess,” Ta said.

She doesn’t want to close down. But she’s running out of ideas.