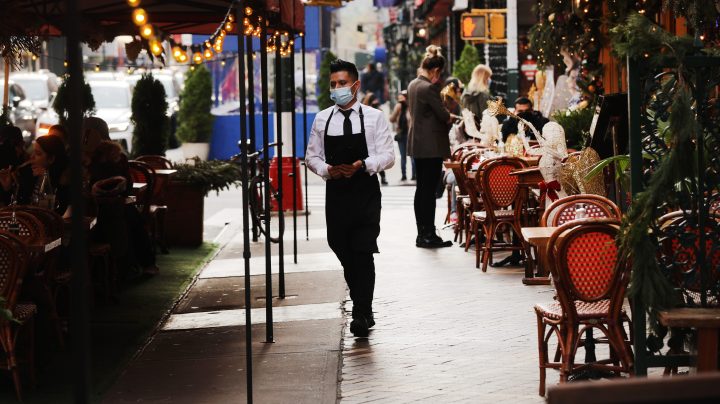 COPY
The national tipped minimum wage is just $2.13 an hour. Companies have to kick in more if workers don't make at least $7.25 an hour when you add in their tips. Spencer Platt/Getty Images

The national tipped minimum wage is just $2.13 an hour. Companies have to kick in more if workers don't make at least $7.25 an hour when you add in their tips. Spencer Platt/Getty Images
Listen Now

Democrats in Congress and the Biden administration are pushing for a $15 minimum wage. And that increase would eventually apply to waiters, bartenders and other tipped workers. It would get rid of the national tipped minimum wage, which is just $2.13 an hour.

Companies have to kick in more if workers don’t make at least $7.25 an hour when you add in their tips. But how did we develop two different minimum wages?

First, let’s discuss the practice of tipping, which originated in Europe among aristocrats and was picked up by Americans in the mid-1800s.

“Rich Americans started going to Europe and coming back with this sense that, ‘We’re going to be aristocrats now,’” said Gerald Friedman, an economist at the University of Massachusetts Amherst. “It was a mark that you had been to Europe. That you were tipping. ‘Oh, I’m going to tip, because that’s what we do in Paris.’”

Strong labor unions in Europe eventually rejected tipping, Friedman said. But in the United States, the end of slavery was what cemented the practice of tipping in American culture.

Companies didn’t want to reach into their own pockets to pay recently freed enslaved people, said Saru Jayaraman, who directs the Food Labor Research Center at University of California, Berkeley.

“Train companies hired tens of thousands of Black men, had them work as porters on the trains for no wage, just to live off the tips of the white customers who were traveling,” she said. The restaurant industry, she added, also “wanted the right to hire Black people and also not pay them.”

Jayaraman said it left these workers at the mercy of people who may have chosen not to tip at all. So some continued to work for next to nothing at times.

There was pushback to the tipping system. It was called “un-American,” and in 1915, some states banned tipping. But those laws were quickly repealed.

The federal minimum wage as we know it was passed in 1938. Here’s President Franklin Delano Roosevelt talking about wages:

In the speech, he talks about “industrial workers.” Tipped workers, whose employers at the time were not required to pay wages, were not discussed in the negotiations.

Rev. William Barber, president of the nonprofit Repairers of the Breach, said they were left out in part because “the powerful forces in the South wanted to make sure Black people and Latinos and others did not have the same equal economic status as white workers.”

In 1966, after mounting pressure from civil rights activists, many of whom were Black workers making extremely low wages, Congress finally set a standard for tipped workers: Employers would have to pay around half the minimum wage and kick in more if the tips didn’t make up the difference. The tipped minimum wage stayed pegged to the regular minimum wage until 1996.

Herman Cain, who would become the head of the National Restaurant Association, testified in 1995 against a proposal to raise wages.

Labor historians say Cain helped push for a compromise: the minimum wage would rise, but the portion restaurants were responsible for would no longer rise as the federal standard did. So the tipped minimum wage stayed at $2.13 and has been there for more than 25 years.

“Now is not a time for a massive increase in labor costs for restaurants, but especially upending a system that works for everyone,” said Mike Whatley, vice president for state and local affairs at the National Restaurant Association. “It works for customers, it works for restaurant operators, but most importantly it works for tipped employees.”

But many activists say how well it works depends on who you are. Several studies have shown that Latinx and Black tipped workers make significantly less tips than their white counterparts.

Following a year of racial upheaval, according to Barber, it’s time to do away with a practice rooted in slavery.

Seven states and three territories already require companies to pay all of their workers the standard minimum wage, regardless of whether or not they get tips. But a change on the federal level is still being debated — as it has for over a hundred years.