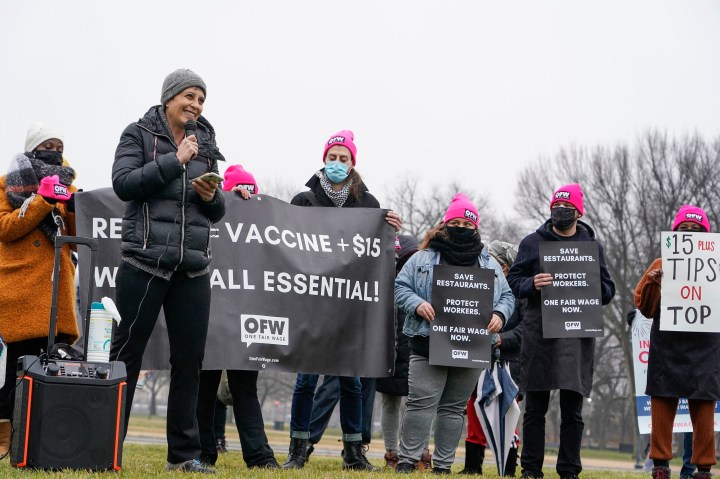 Service industry worker Pam Araiza speaks in support of the Raise the Wage Act, which includes a $15 minimum wage for tipped workers, back in January. Jemal Countess/Getty Images for One Fair Wage

Service industry worker Pam Araiza speaks in support of the Raise the Wage Act, which includes a $15 minimum wage for tipped workers, back in January. Jemal Countess/Getty Images for One Fair Wage

In his American Families Plan, unveiled this week, President Joe Biden said he would set a $15-an-hour minimum wage for early child care staff. He’s also pushed for a higher minimum wage by signing an executive order on Tuesday that would require federal contract workers to make at least $15 an hour.

These piecemeal attempts at raising the minimum wage for certain workers follow the Senate’s rejection of a federal $15 minimum wage in the administration’s COVID-19 relief package. One Independent Senator and seven Democratic Senators voted against it, including Sen. Krysten Sinema (D-Ariz.), who gave the policy a thumbs-down when she voted.

It’s been about 14 years since Congress last raised the federal minimum wage — the longest the U.S. has gone without seeing an increase since it was established in 1938. It now stands at $7.25 an hour, which works out to around $15,000 a year.

Sharece Thrower, an associate professor of political science at Vanderbilt University, said it’s common for the president to change policies for federal workers using executive orders, which they’ve done before to adjust their wages for cost of living.

In 2014, President Barack Obama signed an executive order raising the minimum wage for federal contractors to $10.10.

Thrower noted that she doesn’t think Biden could use an executive order to raise the minimum wage for other types of government workers, like teachers or social workers. She said that those types of workers would probably fall under state or local governments.

“The extent to which presidents can tinker with the minimum wage is limited only by the control that they have over the executive branch — so federal employees,” Thrower explained. “Beyond that, it’s a little bit more constricting for the president.”

Stephanie Luce, a professor at the CUNY School of Labor and Urban Studies, said that Biden is taking a step further by not just raising the minimum wage through executive order, but through child care programs.

“That is unusual,” Luce said. However, she said she sees these moves as occupying “the middle ground” in terms of how ambitious they are.

She pointed out there were members of Congress who wanted Biden to push harder for a $15 minimum wage. Back in February, the Senate Parliamentarian decided that a minimum wage increase couldn’t be in the COVID relief package. (In response, Sen. Bernie Sanders of Vermont pushed for a proposal that would include the increase in the package, but the Senate ended up voting it down 58-42.)

Progressive lawmakers said that Biden could have overridden the Senate Parliamentarian’s ruling.

“But since that failed, I think this is a bold step to start saying, ‘We’re gonna start looking for these other avenues to raise wages,’” Luce said.

Thrower said she thinks Congress hasn’t been able to come to an agreement on raising the federal wage because of how increasingly polarized the legislature has become.

While politicians can’t agree, a majority of Americans support a $15-per-hour minimum wage, according to a Reuters/Ipsos poll.

Luce said the U.S. is unusual, since some other countries raise their minimum wage regularly, with some basing their increases on a formula. (New Zealand’s, for example, has increased every year.)

“We don’t have any of that,” Luce said. “So it’s just always been a matter of political negotiation.”

Luce said that from the 1930s to the 1950s, there was a somewhat regular increase in the minimum wage, which began to stall in the late ‘60s and ‘70s.

“That’s why we started to see in the ‘90s, a focus on cities and states saying, ‘OK, we’re being blocked at the federal level. We’re making no progress. So we’re going to try and raise minimum wages,’” Luce said.

Currently 29 states have their wages set above the federal standard, including California, New York and Vermont. Meanwhile, other states, including Georgia, New Hampshire and Wisconsin use the minimum.