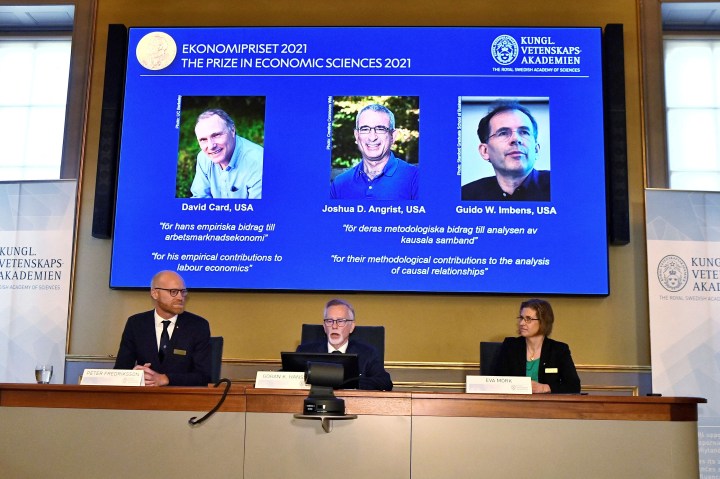 The Royal Swedish Academy of Sciences and members of the Nobel Economics Prize committee give a press conference to announce the winners of the 2021 Nobel Memorial Prize in Economic Sciences. CLAUDIO BRESCIANI/TT NEWS AGENCY/AFP via Getty Images

The Royal Swedish Academy of Sciences and members of the Nobel Economics Prize committee give a press conference to announce the winners of the 2021 Nobel Memorial Prize in Economic Sciences. CLAUDIO BRESCIANI/TT NEWS AGENCY/AFP via Getty Images

The federal minimum wage hasn’t budged in 14 years — the longest period in U.S. history. The minimum currently stands at $7.25 an hour, or roughly $15,000 a year, which has led to the rise of movements like the Fight for $15, which point out that families cannot survive on this amount.

Those against a higher minimum wage, including former President Donald Trump, have argued that forcing businesses to raise wages will lead to layoffs because of higher payroll costs.

But Nobel Prize-winning economist David Card showed in his work with the late Alan Krueger, that raising the minimum wage does not reduce hiring.

Card’s work has also looked at the impact of immigration on local workers’ wages and unemployment rates in the Miami labor market, finding “virtually no effect.” (In an interview with the Nobel committee, Card said “a cautionary tale is that there could’ve been small effects, because the ability to precisely measure the effects when it only affects one city is somewhat limited.”)

Meanwhile, Angrist and Imbens’ work showed “how precise conclusions about cause and effect can be drawn from natural experiments,” according to the Royal Swedish Academy of Sciences.

In the early 1990s, Card and Krueger looked at the effects of New Jersey’s decision to raise the minimum wage from $4.25 to $5.05 an hour. The two surveyed more than 400 fast-food restaurants in New Jersey and eastern Pennsylvania, where the minimum wage was unchanged.

They found “no indication that the rise in the minimum wage reduced employment.”

The RSAS said that Card’s work in the early 1990s “challenged conventional wisdom, leading to new analyses and additional insights.”

Sharece Thrower, an associate professor of political science at Vanderbilt University, told Marketplace earlier this year that increasing polarization in the legislature has led to Congress’ inability to raise the minimum wage.

Progressive lawmakers pushed for a $15 minimum wage earlier this year to be included in President Joe Biden’s COVID-19 relief package, but the Senate Parliamentarian ruled that it could not.

However, Biden has been able to enact policies within his powers to raise the minimum wage to $15 for some workers, such as federal contractors. And individual states have taken the initiative to raise their own wages above the minimum. The minimum wage currently stands at $12.50 in New York, $15.20 in Washington, D.C., and $13 in California.