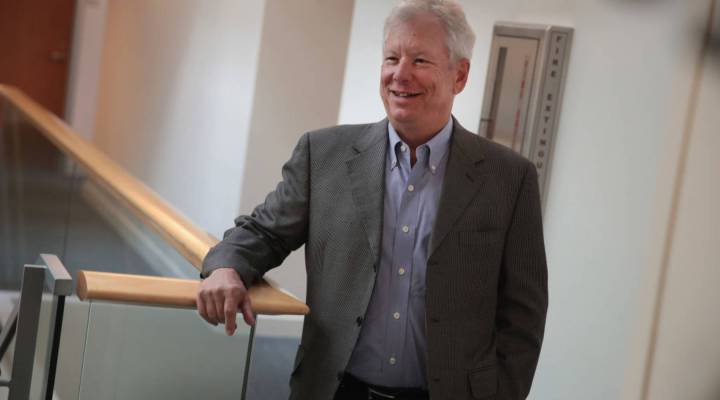 COPY
University of Chicago Professor Richard Thaler arrives at his office after learning he had been awarded the Nobel prize in economics. Scott Olson/Getty Images

University of Chicago Professor Richard Thaler arrives at his office after learning he had been awarded the Nobel prize in economics. Scott Olson/Getty Images
Listen Now

Not everyone initially supported Richard Thaler for his work in behavioral economics, but he’s now the 2017 Nobel Prize winner for his research in the field.

“It was basically because economists weren’t smart enough to write down models of real behavior,” Thaler once explained to us in an interview.

He pushed for the idea that psychology can help understand human behavior, and argued that economic theory has to account for the fact that human beings are irrational at times.

One economist who has been fully supporting him: Yale’s Robert Shiller who won the Nobel Prize in economics himself back in 2013.  We extended this Nobel Prize winners party by chatting with Shiller about the “revolutionary” Thaler, why psychology and the social sciences are so crucial for economic research, and whether he has any financial advice for the new winner. Below is an edited transcript.

David Brancaccio: So you’re talking to someone last night before the Nobel Prize in economics was announced and they asked for your prediction. What do you say?

Robert Shiller: I would say “Dick Thaler comes to mind first, but I don’t know that he’s uniformly popular.” So I said, “He still is my prediction.”

Brancaccio: Not uniformly popular because of his ideas?

Shiller: Right. I think he’s a revolutionary. And some people don’t like him, because he’s like the boy pointing out the emperor is wearing no clothes. In so many cases, he’s very direct and forceful in his intolerance of bad economic research.

Brancaccio: So for someone just coming to work for the first time, this is about applying, for instance, psychology to actually how real humans make their choices.

Brancaccio: And not just assume that we are these magical machines for making rational decisions at every point in our lives.

Shiller: That’s how he might put it. Is that a quote from him? Magical machines. Economics does use the assumption of rational behavior productively. It’s a question of when you stop relying exclusively on that.

Brancaccio: Now this is crucial stuff that Dr. Thaler focuses on, because when we misunderstand our motivations, it’s not just an academic exercise. Entire economies can tremble if not collapse if we get this wrong.

Shiller: Well, yes. History shows many examples of economies collapsing, and worse than that, when they collapse they sometimes end up at war with each other. So these things really matter. And then the question is, well, what drives these events? You just can’t make much progress if all you think about is rational human behavior. It’s just not so. And Dick has shown evidence of many different directions. In fact, it’s kind of breathtaking how many things he’s done that illustrate that point.

Brancaccio: Now just before we go you’ve won the Nobel prize in economics yourself. Any personal finance advice for your colleague Dr. Thaler, like maybe don’t spend it all in one place?

Shiller: He’s doing all right.  I don’t normally give him advice.

Brancaccio: Maybe you get advice from him.

Shiller: He’s helped me in my research direction. He teamed me up with George Akerlof and we’ve written two books together, so I think he has excellent judgment and I don’t think he needs advice from me on how to spend his prize money.

Brancaccio: For the record, I made up that phrase magical machines on the fly just now — we don’t want to attribute it to a Nobel laureate.