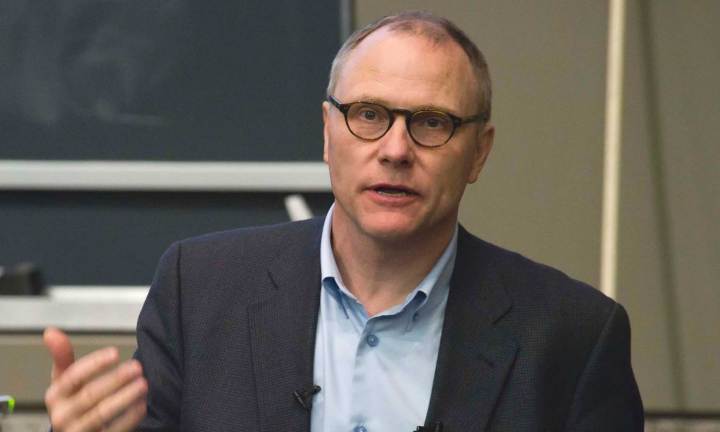 The 2021 Nobel Memorial Prize in Economic Sciences was awarded to three people on Monday for their work in understanding how economic forces actually play out in real life.

The third recipient, economist David Card of UC Berkeley, was recognized for his work, as well as other research, with the late economist Alan Kreuger on how raising the minimum wage doesn’t necessarily lead to lower employment, pushing against the conventional expectation around rising wages you might have learned in your Economics 101 class.

“There’s hundreds of other hypotheses in economics that aren’t literally true,” Card told “Marketplace Morning Report” host Sabri Ben-Achour in an interview. “And how much they’re not true is sort of a matter of open debate and research.”

Below is an edited transcript of their conversation about Card’s award-winning work, what led him to study a real life wage experiment and how he and other economists manage to find those ideal, real world scenarios.

Sabri Ben-Achour: You were awarded the prize as much for what you studied as how you studied it. Can you explain how you went about examining this question, for example, of whether raising the minimum wage actually causes reductions in employment?

And we thought, well, that’s pretty good because if there was an underlying trend or seasonal factors or things were changing in the industry, we would be able to pick that up by what was going on in Pennsylvania and just measure the difference between New Jersey and Pennsylvania as the effect of the minimum wage, because that’s the only thing that was different between the two states. And that idea that kind of caught on after that, and was picked up in lots of other different studies, looking at not just the minimum wage, but many other kinds of events.

Ben-Achour: Using this methodology, you found that, you know, raising the minimum wage doesn’t necessarily hurt employment. A lot of people were skeptical of that. And they might ask, how doesn’t it? Have you figured out why not?

Card: We had a perfectly legitimate explanation. And what’s happened I think is over the last 30 years, people have realized that that explanation is probably right. So the situation was this; before the minimum wage went up, it was actually (a) relatively good time in both New Jersey and Pennsylvania. And so there were a lot of stores advertising for workers with “Help Wanted” signs and recruitment bonuses and all kinds of incentives to try and get people to come in the door, almost exactly like it is right now in the labor market. So a lot of employers looking for workers. And you might ask, “well if an employer is looking for workers and can’t get them, why don’t they just raise the wage?”

There’s a really simple answer for that, which is, if they raise the wage, yes, it’s true that might attract some new workers, but they’ll have to pay a higher wage on the ones they’ve already got. And so they’re going to actually do a kind of a trade off and say, well, I’m willing to put up with some vacancies in return for keeping wages low on the people I’ve already got in the house. And in that scenario, if you force them to raise the wage, they will be able to attract those extra workers and the people they’ve got will get kind of a bonus that they wouldn’t have gotten if you hadn’t forced them to raise the wage. But in addition, you’ll get all those extra workers that wouldn’t have come in the door, except for the fact that now you’ve raised the wage. And so that kind of model makes total sense to, I think, most people. And what’s different about it is it asserts that employers set wages; wages aren’t just set by a abstract market mechanism like they would be, say, in the stock market.

Ben-Achour: I mean, what’s so very interesting about that, is that it you know, upon looking at the details, you find that, you know, the good old economic forces of Econ 101 are a little more complicated in the real world. Do you think there are other standard ways of thinking and economics that are ripe for challenge these days?

Card: Actually, this particular question about do employers set wages and if so, how much different are they setting wages for different types of workers, is really central to issues about, say, the gender wage gap, because work that I’ve done much, much later than the work that was cited by the Nobel Committee suggested that firms are setting wages a little bit lower for women than for men. And so the benefits of working for a more profitable employer are not quite as good for women as for men, and that can account for something like, you know, quarter to a third of the gender wage gap. And recently, I’ve done exactly the same kind of analysis, looking at the difference between non-white and white workers in Brazil, where there’s a lot of non-white workers, and really good data and found the same kind of thing. So I think that same idea applies for wage setting, generally. And there’s hundreds of other hypotheses in economics that aren’t literally true. And how much they’re not true is sort of a matter of open debate and research.

Card: Well, I think labor economists are ordinarily working on a topic or set of topics and trying to keep track of public policy developments and legal features and things like that. So lots of times, you know, practicing economists will kind of have a list or a whiteboard or something. And keeping track of, you know, if you’re working on a low-wage workers, you need to know what’s the minimum wage in every state. Nowadays, there’s different minimum wages in different cities. So if you’re working on that topic, you might have that list. And you might suddenly notice, “hey, what’s going on here? San Francisco has raised their minimum wage, to you know, a quite high level, maybe we could study that.”

That’s one way that it’s found out another way is, you know, we listen to the news, same as everyone else. And someone in the news says, “well, these crazy people have done this!” And we say, well, that may be crazy, but it’s good for us. So it opens up an opportunity for research. And there’s a lot of really, you know, different ways that you can find them, things that are like experiments. For instance, a technique that’s used widely these days, looking at judicial systems and quasi-judicial systems, like immigration courts and things. People that are handled by those courts are treated by different judges. And if the judges have different tastes or different views, that’s going to change the probability that someone ends up being sentenced to jail versus probation or something like that. And (that) allows you to then study the downstream impacts of a judicial system.

Ben-Achour: You were also recognized for your research on immigration. Essentially, you found that immigration doesn’t necessarily reduce wages, which is a claim we you often hear. How did you study that? And let me ask you the same question – how does it not reduce wages?

Card: Well, to tell you the truth, the idea that immigration reduces wages is, to most economic ways of thinking, actually not correct because we don’t think that if we have extra people in the country that wages are going to be lower. That was an idea that the famous 18th century philosopher, I guess he was a preacher, (Thomas Robert) Malthus thought was true. That’s the Malthusian principle, that more people means lower average wages per person. And what people discovered in the 19th century was actually, that’s not true if the economy can invest in more capital as we get more people. So it’s not actually the law of economics that more people means everyone’s worse off. In fact, (in) modern economics, the Nobel Prize was awarded a few years ago to Paul Romer for what’s called Modern Growth Theory.

Modern Growth Theory, one of its basic tenets is a bigger economy can be more efficient and can actually be higher wealth per person, because there’s just more opportunities for innovation and more inventions going on and so on. So the fundamental idea that more people makes the labor market worse is actually not an economic prediction. So I’ve always been frustrated by how poorly that’s understood and how economists all become Malthusians when they talk about economic immigration, whereas they would make fun of Malthus in other occasions, but in the case of what you can have is, if you have an inflow of a particular skill group – for instance, in the case of the Mariel Boatlift, which is what I studied in this study – you’re thinking of a large number of people (who) came from Cuba directly to Miami, and most of them were very low skilled and didn’t speak English at all. So that’s going to change the relative number of low-skilled workers and wouldn’t necessarily change the average wage in Miami, but it would be expected potentially in some models to lower wages for other low-skilled workers, for instance, some low-skilled African Americans in Miami and so that’s exactly what I tried to look at. And I didn’t find that that was the case. But you know, it’s possible there was very, very small effects, but there certainly wasn’t large effects from this massive inflow that came after the Mariel Boatlift.