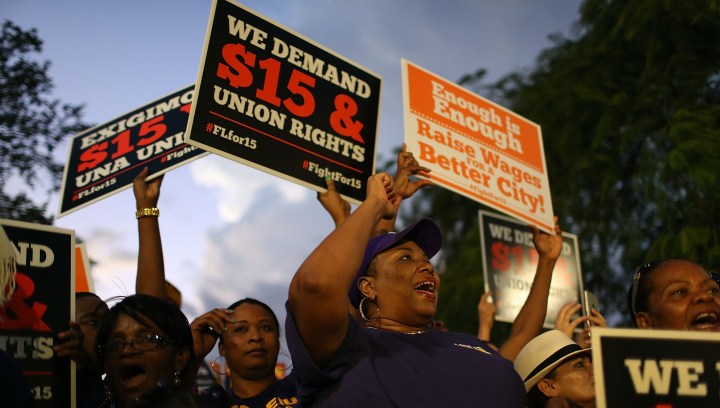 COPY
Many Democrats back a $15 hourly federal minimum wage. That can buy you different things in different parts of the country. Joe Raedle/Getty Images
I've Always Wondered ...

Many Democrats back a $15 hourly federal minimum wage. That can buy you different things in different parts of the country. Joe Raedle/Getty Images
Listen Now

President Joe Biden has announced that the minimum wage for hundreds of thousands of federal contract workers will increase from $10.95 an hour to $15 an hour next year. This the president can do by executive order. But raising the federal minimum wage for all American workers requires legislation from Congress, which last raised the minimum wage to $7.25 an hour in 2009.

Democrats are pushing to more than double it to $15 over several years. Republicans (and some conservative Democrats) oppose such a large increase, warning it would hurt the economy and low-wage workers.

Listener Carol Hwang of Guilford, Connecticut, posed this question to Marketplace’s “I’ve Always Wondered”: “If you make the minimum wage $15.00/hour, it’s not enough in New York and it’s way too much in Peoria. I’ve always wondered — would it be possible to tie the minimum wage to the cost of living? Have it vary across the country?”

This concept has been floated in Congress before, and economist Gary Hoover at Tulane University thinks it’s a good idea. He said at $7.25/hour, the current federal minimum wage leaves a lot of full-time, year-round workers in poverty.

“What could happen,” said Hoover, “is every region, or even to the state level, or maybe some cities, index their own minimum wage, putting these people above the poverty level.” He said raising the minimum wage to $15 an hour across the board could disrupt labor markets in regions with lower prevailing wages. So he suggests raising it modestly, then adjusting to local economic conditions. “We still have to have some type of minimum. What we’re trying to do is let the minimum wage float by region of the country.”

But wouldn’t it be supercomplicated for employers to deal with multiple federal minimum wages?

Mike Draper is the owner of Raygun, a Midwest clothing-and-home-goods retail chain with about 80 employees. It has a store and headquarters in Des Moines, Iowa. “We [also] have stores in Cedar Rapids [Iowa], Iowa City, Kansas City, Chicago and Omaha [Nebraska],” said Draper, where the minimum wages set by state and local governments are $7.25, $10.30, $13.50 and $9 per hour, respectively.

In the 1930s, Southern lawmakers pushed the idea of varying the minimum wage to cater to lower-wage regions, according to economist Heidi Shierholz at the progressive Economic Policy Institute. And she said the policy had similar drawbacks then to the drawbacks it would have today: “It would lock in existing low-wage conditions in certain regions that are the result of historic racism.”

Shierholz, who served as chief economist in the Obama administration’s Labor Department, believes the federal government should set a single nationwide minimum wage of at least $15 an hour. Then state and local governments can set their own minimum wages higher, as warranted by local economic conditions and the cost of living.

Michael Strain, at the conservative American Enterprise Institute, thinks $15 is way too high and would hurt employers and low-wage workers. But — like Shierholz — Strain opposes the idea of the federal government setting varied minimum wages all over the country.

For his part, Raygun owner Mike Draper said he’d be fine with a substantial, across-the-board increase in the federal minimum wage. He said he already pays his employees above minimum wage in the markets where he operates.

“I would prefer the minimum wage to be higher — and uniform around the country,” Draper said, “just because I think it’s the most efficient way to inject some spending power into the U.S. economy.”