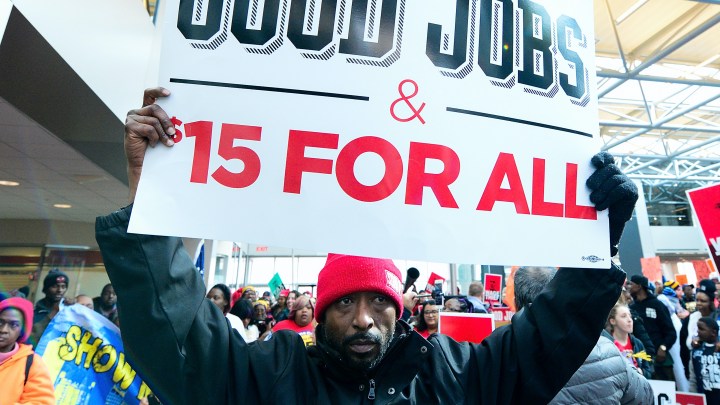 COPY
The bump up to a $15 hourly minimum wage would make a big difference for people of color in particular. Jeff Curry/Getty Images

The bump up to a $15 hourly minimum wage would make a big difference for people of color in particular. Jeff Curry/Getty Images
Listen Now

Inside the coronavirus relief bill making its way through House committees this week is a provision that would raise the federal minimum wage from $7.25 to $15 an hour.

The thing is — some states already have a $15-an-hour minimum.

But for those that don’t, the hike could more than double workers’ wages.

Benjamin Yellin is a bartender at the Whiskey Kitchen in downtown Raleigh, North Carolina. He spells his name Y-E-L-L-I-N, by the way — so no relation to Treasury Secretary Janet Yellen.

Yellin said his hours and income have been cut by about half during the pandemic. Since he relies on tips, Yellin never knows what he’ll make each day.

“To know that you’re going to work and able to at least make that $15 an hour (whatever that minimum would be), that would be so extremely helpful,” he said.

Yellin only makes $2.13 an hour, plus tips. The latest relief bill — the American Rescue Plan — would gradually raise the federal minimum wage for all workers, including tipped employees, to $15 an hour.

Tsedeye Gebreselassie, an attorney at the National Employment Law Project, said the higher minimum wage would especially help people like Yellin, who are now the front-line workers of the pandemic.

“The median pay for workers in those jobs — nursing assistants, home health care aides, grocery store workers — is below $15 an hour,” she said.

That’s because 60% of the workforce in this country lives in states with minimum wages below $15 an hour. Heidi Shierholz, senior economist at the Economic Policy Institute, said the bump up to $15 would make a big difference for people of color.

“Almost a third of Black workers would see a raise with this minimum wage increase. For Hispanic workers, it’s almost as high — it’s 26%,” she said.

And Shierholz said more than half of the people who’d get a raise with a $15-an-hour federal minimum wage would be women, many supporting families.