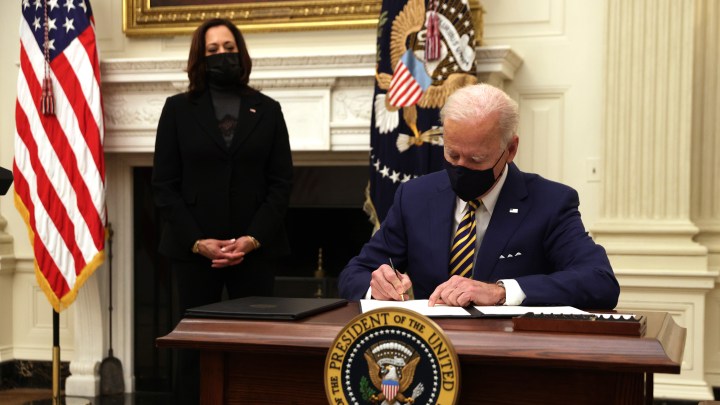 Among his executive actions Friday, President Joe Biden set the stage for raising the minimum wage for federal contractors and employees to $15 an hour.

Technically, he asked the Office of Personnel Management to come up with recommendations on doing that. But it’s laying the groundwork for a broader push to raise the federal minimum wage across the board. It has been stuck at $7.25 since 2009.

Biden is starting with contractors, but he campaigned on raising the federal minimum wage for everyone. It’s in his $1.9 trillion COVID-19 relief proposal.

“If it doesn’t go through COVID, I certainly think we will see legislation within the first 100 days to raise the minimum wage,” said Michael Lotito, who co-chairs the Littler law firm’s Workplace Policy Institute.

This is a fraught time to tackle minimum wage increases. On the one hand, it would take on long-standing inequities deepened by the pandemic, said Yana Rodgers, director of the Center for Women and Work at Rutgers School of Management.

“This is a better time than any of all to increase wages for low-wage workers because they’ve been hit particularly hard by the pandemic,” Rodgers said. And it would narrow gender and racial pay gaps, she added.

On the other hand, many small businesses are operating on a knife’s edge during this downturn, Challenger said, and “pressure on wages is going to be a very difficult pill for many businesses to swallow at the moment.”

There are compromise options like allowing regional variations, exceptions for economic downturns or raising the minimum wage slowly. That’s what Florida voters approved in November, phasing in a $15 minimum wage even in that solidly purple state.

Challenger also said public opinion in favor of the raise seems to be growing.

“An increase in the minimum wage seems to be more popular than at any point I can recently remember among the population,” he said.

There are already 29 states that have passed laws requiring minimum wages higher than the federal level.