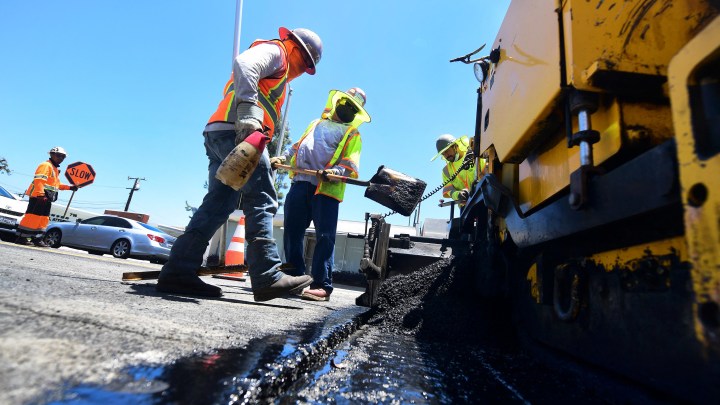 COPY
The Department of Labor is preparing updates to the regulations of federally funded construction jobs. Above, a crew resurfaces a road in Alhambra, California. Frederic J. Brown/AFP via Getty Images
Workplace Culture

The Department of Labor is preparing updates to the regulations of federally funded construction jobs. Above, a crew resurfaces a road in Alhambra, California. Frederic J. Brown/AFP via Getty Images
Listen Now

The bipartisan infrastructure bill is officially called the “Infrastructure Investment and Jobs Act,” and President Joe Biden has touted it as a creator of good-paying jobs. What makes federally funded construction jobs “good” is a concept called prevailing wage — a minimum standard that federal construction contractors have to pay workers. The Department of Labor is now preparing an updated rule ahead of infrastructure projects rolling out.

The idea of setting a prevailing wage for federally funded construction projects goes back to a 1931 law called the Davis-Bacon Act.

“We do surveys of carpenters, electricians, plumbers, and we use that to set wage determinations in each local community,” she said.

So if the government is, say, building a highway in Los Angeles, workers must be paid a minimum wage for each specific type of work in that county. Contractors can’t improve their bids through, for example, cutting labor costs by bringing in cheaper crews from a neighboring county or state.

It’s particularly important because of the nature of the industry, said Esmeralda Aguilar with North America’s Building Trades Unions.

“Construction workers do not work 9 to 5, 40-hour workweeks,” she said. “And so it’s important that they have stability in wages.”

But some construction firms warn of delays because the infrastructure bill could fund types of work that require new surveys to determine wages, as happened with some 2009 stimulus bill projects.

“It serves as a barrier to getting some of this infrastructure money out the door and projects built quickly,” said Ben Brubeck with Associated Builders and Contractors.

Perhaps bigger delays could come from an estimated shortfall of 430,000 workers in construction, which might push up wages even more.

“Because labor costs are a relatively small percent of overall construction costs, prevailing wages don’t have an impact on overall costs,” he said, while research shows they tend to lead to the hiring of more skilled workers, greater productivity and better recruiting into apprenticeship programs — which could help meet the need for construction labor.