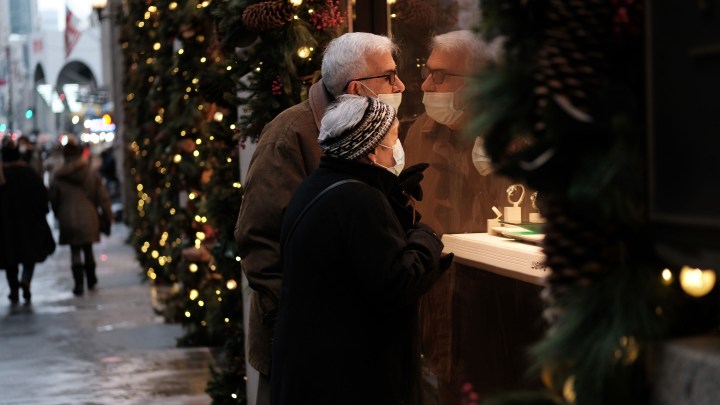 COPY
Even with positive news about vaccinations, most of the news about the economy and COVID-spread has been downbeat lately. Spencer Platt/Getty Images
COVID-19

Even with positive news about vaccinations, most of the news about the economy and COVID-spread has been downbeat lately. Spencer Platt/Getty Images
Listen Now

Consumer confidence drives consumer spending, which is two-thirds of U.S. gross domestic product. And lately, consumers haven’t been feeling a lot of good vibes about the economy.

The University of Michigan’s index of consumer sentiment slipped up slightly for December, but remained higher than last month despite the recent surge in COVID infections and deaths. The Conference Board’s confidence index fell in December, back to levels last seen in the summer. Other key indicators of consumer behavior like willingness to go out to shop or eat are in the doldrums as well, as the pandemic rages on.

Even with positive news about vaccinations, most of the news about the economy and COVID-spread has been downbeat lately, said Robert Frick at Navy Federal Credit Union.

“Retail spending is decreasing, and the times are not good,” Frick said. “Even with the federal aid package, we’re looking at a few bleak months.”

How consumers feel about the future depends a lot on how pandemic shutdowns and layoffs have affected them, said Mark Hamrick at Bankrate.

“There are a lot of people who are doing just fine, who’ve been able to work from home,” Hamrick said. “They may own their home, they have substantial assets.”

Those folks are not overly worried about the future. Other workers are more anxious.

“Those who have really been on the front lines of these industries hurt most in the pandemic — leisure and hospitality, retail,” Hamrick said. “And they are more financially fragile.”

Hamrick said a recent Bankrate survey found that half of American households have lost income in the pandemic.