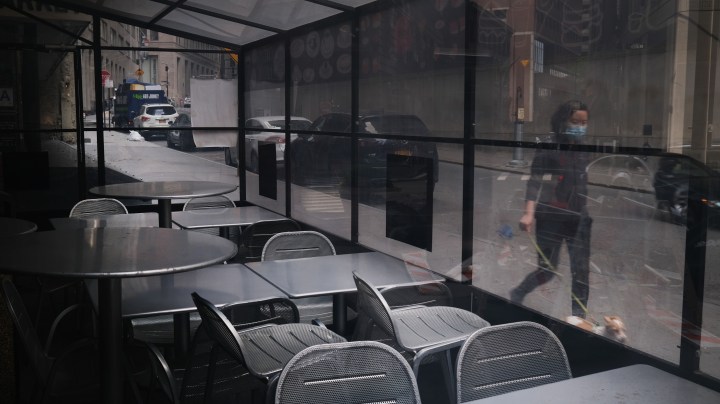 COPY
An empty New York restaurant in May 2020. A resurgence of COVID cases is weighing on consumers' moods, especially among the vaccinated. Spencer Platt via Getty Images
COVID-19

An empty New York restaurant in May 2020. A resurgence of COVID cases is weighing on consumers' moods, especially among the vaccinated. Spencer Platt via Getty Images
Listen Now

Consumers are not happy, according to a report from the University of Michigan published Friday.

The university tracks how consumers are feeling with its consumer sentiment index, and after falling pretty hard in July, the index plummeted by more than 10% in early August.

It’s now at a level lower than what we saw in April 2020, the worst point of the early-pandemic shutdowns and layoffs.

“The losses in early August were widespread across income, age, and education subgroups and observed across all regions. Moreover, the [losses] covered all aspects of the economy, from personal finances to prospects for the economy, including inflation and unemployment,” the report read.

“Consumers have correctly reasoned that the economy’s performance will diminish in the next several months due to the delta variant. The emotional part has to do with dashed hopes that the pandemic would end soon,” Curtin said.

Consumers are voting — with their feet. They rushed out when mask recommendations and mandates were lifted, according to Megan Wintersteen at Zenreach, which measures foot traffic in stores and restaurants.

But in places where restrictions have been reimposed, “over the last month, we’ve really seen things flatten and even decline,” Wintersteen said.

“You know, it is the vaccinated who continue to be most attuned to what’s happening in the pandemic. Maybe they themselves are taking a step back, less time in restaurants and whatnot. And the unvaccinated just don’t care as much about the coronavirus, so they’re not responding,” Jackson said.

Consumer sentiment has fallen more for vaccinated than unvaccinated people in recent weeks.