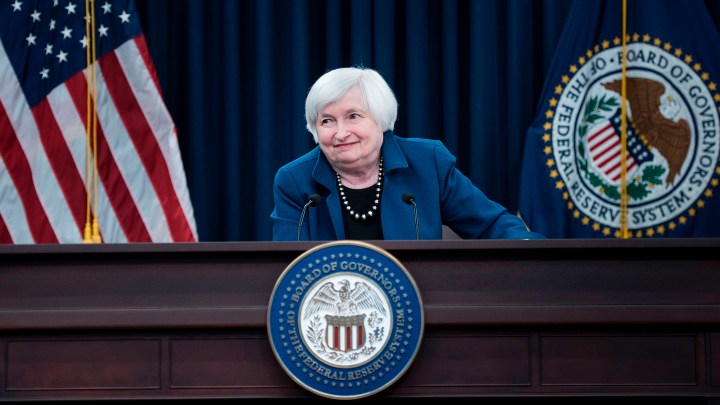 COPY
Yellen is seen as an authority on what happens if the government cuts back on stimulus spending too soon. Brendan Smialowski/AFP via Getty Images

Yellen is seen as an authority on what happens if the government cuts back on stimulus spending too soon. Brendan Smialowski/AFP via Getty Images
Listen Now

President-elect Joe Biden is set to nominate Janet Yellen as treasury secretary. Yellen, a former chair of America’s central bank, the Federal Reserve, would be the first woman to head the Department of the Treasury.

Marketplace’s Nancy Marshall-Genzer has been looking into Yellen’s nomination. The following is an edited transcript of her conversation with “Marketplace Morning Report” host David Brancaccio.

David Brancaccio: Nancy, what might be Biden’s thinking with this choice?

Nancy Marshall-Genzer: Yellen has a ton of experience. She also headed the Council of Economic Advisers in the Clinton administration. She has a lot of expertise in unemployment. She spoke out recently about the suffering of the millions of Americans who are unemployed right now.

Brancaccio: Given her track record, what’s her instinct on how to get the U.S. economy out of this mess?

Marshall-Genzer: She said recently that Congress needs to spend more to stimulate the economy and help small businesses and the unemployed. She’s seen as an authority on what happens if the government cuts back on stimulus spending too soon. Edward Mills is a Washington policy analyst at Raymond James, which is a Marketplace underwriter. He says that if Yellen is confirmed by the Senate, she and Fed Chair Jerome Powell will be what he calls a “compelling dynamic duo.”

Edward Mills: And would be squarely focused on getting the economic recovery going, and having a partnership which the CARES Act outlines, between the Fed and Treasury, that would be supercharged. And the market and the economy would react extremely well to that.

Marshall-Genzer: Mills contrasts that with the spat we saw last week between Powell and current Treasury Secretary Steven Mnuchin, with Mnuchin refusing to extend most of the Fed’s emergency pandemic lending programs. Mills says Yellen will work closely with Powell to get those programs going again, although they’ll have less money to work with since Mnuchin demanded that the Fed return some unused funds to Congress.