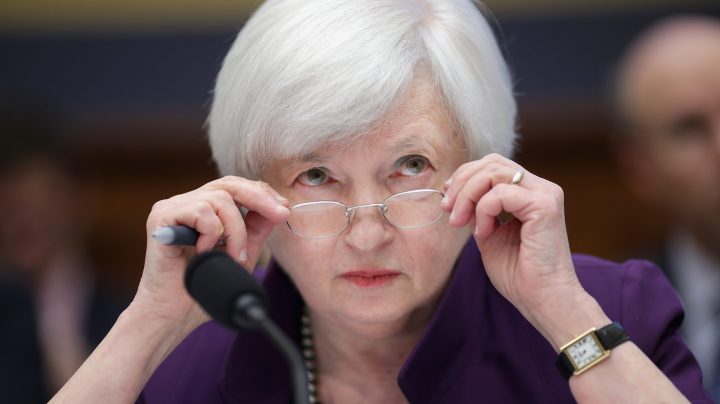 COPY
"She’s 5-foot nothing, but hand to God, she can pop a collar, she can rock a power bob." Chip Somodevilla/Getty Images

"She’s 5-foot nothing, but hand to God, she can pop a collar, she can rock a power bob." Chip Somodevilla/Getty Images
Listen Now

When then-President-elect Joe Biden announced his intent to nominate Janet Yellen for secretary of the treasury, he joked that “Hamilton” creator Lin-Manuel Miranda should write a musical about her.

So “Marketplace” asked Dessa, a member of the hip-hop collective Doomtree and one of the artists who contributed to “The Hamilton Mixtape,” to think about what that might sound like. Here’s what she and her collaborators came up with:

Dessa told “Marketplace” host Kai Ryssdal that she spent a lot of time watching old speeches and flipping through photographs of Janet Yellen while writing the song.

“I read a lot about her to make sure that she was somebody who I’d like to send up,” Dessa said. “And it was really exciting to become a fan of Janet Yellen.”

On the music side, Dessa said she and collaborators Lazerbeak and Andy Thompson drew inspiration from Lin-Manuel Miranda.

“I think both Andy Thompson and Lazerbeak put another ear on the ‘Hamilton Mixtape’ (shoutout Lin) just to kind of remind themselves how that particular piece of music came together and nod to it as best we could,” she said.

The song, “Who’s Yellen Now?” is now available on Spotify, Apple Music, and other streaming services.

“The three of us who worked on this song … I don’t think we’ve ever had so much fun,” Dessa told Ryssdal. “It was like, how do we get out of this normal rap game and into this [cabinet] appointment niche because it was so much fun to write.”

Dessa was wrong about what musical collaboration looks like