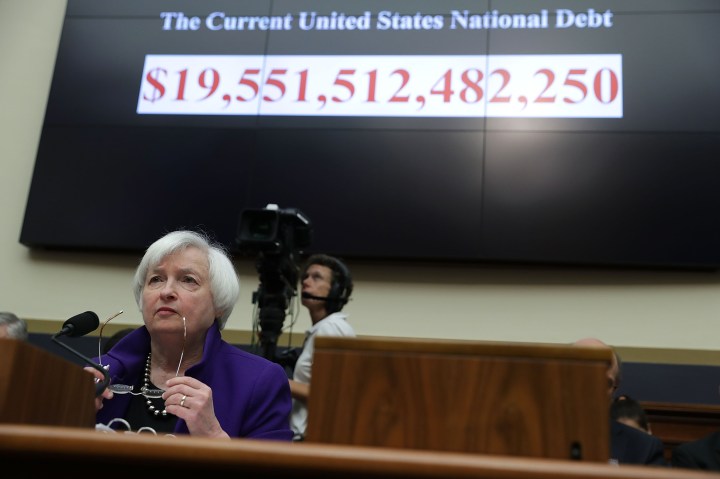 COPY
Then-Federal Reserve Chair Janet Yellen testifies before a House panel in 2016, with the national debt displayed in the background. Yellen, now nominated to run the Treasury Department, is focused on funding an economic recovery. Alex Wong/Getty Images

Then-Federal Reserve Chair Janet Yellen testifies before a House panel in 2016, with the national debt displayed in the background. Yellen, now nominated to run the Treasury Department, is focused on funding an economic recovery. Alex Wong/Getty Images
Listen Now

“To avoid doing what we need to do now to address the pandemic and the economic damage that it’s causing would likely leave us in a worse place economically and with respect to our debt situation than doing what’s necessary,” she said.

The thinking of Yellen, and many other economists, goes like this: We need to borrow and spend whatever it takes to get the economy back on its feet, now.

Former Fed economist Claudia Sahm said to think of the economy like a house with a leaky roof. If you don’t fix it now, you’ll have a big, expensive mess to clean up later, when it rains.

“And that all costs so much more than if you’d just fixed the roof in the very beginning when you saw that we had a problem,” she said.

Sahm added that if the government doesn’t pour enough money into keeping businesses going so they don’t have to lay off employees, the economy won’t fully recover.

Besides, said Doug Elmendorf, dean of the Harvard Kennedy School and former director of the Congressional Budget Office, if you invest in the economy now, you can help it not just recover — you can make it stronger.

“If we use government borrowing to build infrastructure, conduct research, then the debt will leave our children and grandchildren better off because of the value of those investments,” he said.

At Tuesday’s hearing, Yellen said we do need to be responsible about the growing federal debt. But David Beckworth, senior research fellow at the Mercatus Center at George Mason University, said investing now means the debt will be less of a burden.

Beckworth added that the national debt could even double without causing big problems that would trip up the economy right now.