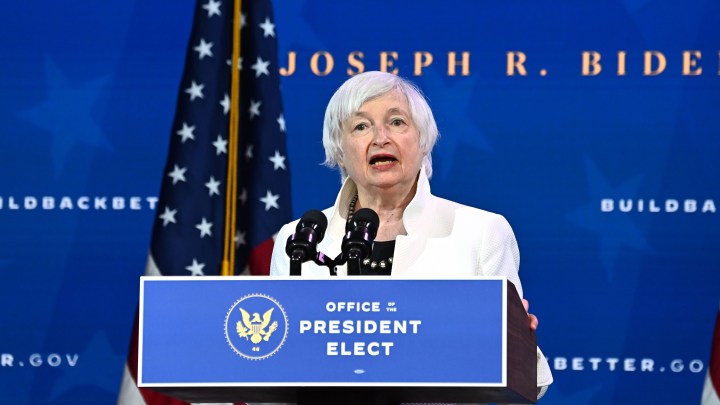 The confirmation hearing for President-elect Joe Biden’s Secretary of the Treasury nominee Janet Yellen is set for Tuesday. Yellen is the former chair of the Federal Reserve.

In fact, Yellen has had a connection to public service since the 1970s when she started out as a Fed economist. Since then, she’s run President Bill Clinton’s Council of Economic Advisors, the San Francisco Federal Reserve, and served as Chair of the whole Federal Reserve System before President Donald Trump declined to reappoint her.

That’s the short version of her resume. According to Andrew Levin, a professor of economics at Dartmouth, “she will be maybe the most qualified treasury secretary we’ve ever had in the history of the United States.”

Levin, who was also an advisor to Yellen at the Fed a decade ago added, “she was the best boss that I’ve ever had. She has a lot of common sense. She doesn’t jump to conclusions; she wants to think things through carefully.”

Don Kohn, senior fellow at the Brookings Institution and a former Vice Chair of the Fed, called Yellen conventional, as economists go.

“But, I think with a twist,” he said. “And the twist in my mind is she’s very aware of how the world really works.”

Some economists see the world in numbers and complex models. Kohn said Yellen sees it in terms of how real people are affected on the ground.

“When she was chair of the Federal Reserve board, she emphasized the advantages of running with very strong labor markets because it would lift up people who were at the bottom of the income distribution and give them opportunities,” said Kohn.

Yellen enjoys bipartisan support. But senators will likely ask questions during her confirmation hearing that reflect their own economic concerns during this pandemic.

They are expected to grill her about her thoughts on the consequences of deficit spending and whether and how much more fiscal stimulus is needed and more.

Some of those issues will be among the first she would face on the job. Seth Carpenter, Chief Economist at UBS said that “one of the immediate priorities of the Biden administration will be dealing with the COVID crisis and thinking about some sort of response to that.”

Carpenter added “she’ll be part of the economics team debating what exactly should the administration pushing for with Congress.” Even so, Yellen is not expected to have any trouble getting confirmed.