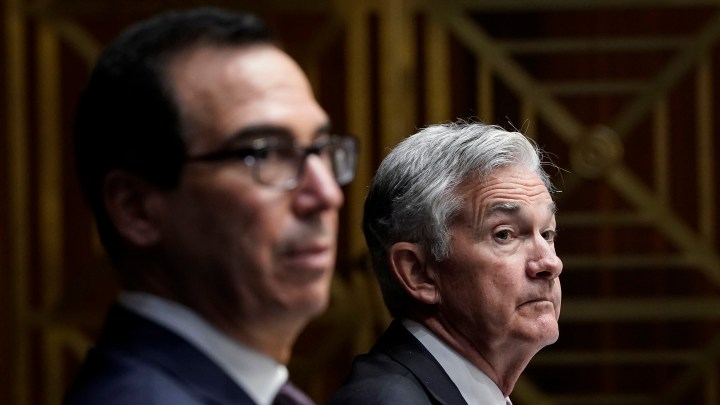 Two days after Federal Reserve Chair Jerome Powell urged the Trump administration to keep a pandemic relief program at the ready, U.S. Treasury Secretary Steven Mnuchin said its time for the central bank to end the program and turn unused taxpayer funds back over to the treasury.

This is about ending two programs to underpin corporate bonds and municipal debt, and another that makes borrowing easier for mid-sized businesses. Karen Petrou, managing partner of the Washington-based economic consulting firm Federal Financial Analytics, has more on this. The following is an edited transcript of her conversation with “Marketplace Morning Report” host David Brancaccio.

David Brancaccio: So what is going on here? Is this a difference of opinion among reasonable people about when to ratchet back on some stimulus?

Karen Petrou: In part, it’s a difference of opinion between reasonable people on that, as well as on a much, I think, more important question, buried in some of the accusations, which is what is the role of the Fed. Programs like the municipal bond program and the Main Street Lending Program have not worked, in part because the Fed is a central bank. And when you demand that it take on fiscal government tasks like saving a sector, it does that very carefully, and, frankly, very badly. These are properly functions that Congress should dictate. And if we want to spend lots more money rescuing sectors — and I think in particular it’s for state and local governments — we have to do that. Congress should be doing that. All of these facilities were half-baked solutions to try to get around Congress’s inability to make up its mind.

Brancaccio: But we live in a time when economists like yourself are crying out for more federal stimulus, this might imply less. So do you stand on the side of the Fed on this particular dispute?

Petrou: Yes and no. I agree with the Fed that, particularly given the awful pandemic news we’re getting, the economy is going to need rescuing. The fact is none of these Fed programs, at least the ones that Treasury is targeting, has worked. And they haven’t worked well because of the uncomfortable square peg-round hole challenge of getting the Fed to do the Treasury’s and the federal government’s bidding.

Now, in the absence of a functioning Congress, I think the Fed still needs the facilities. But it would be a lot better if Congress would take back and use the $455 billion the Treasury wants to give it to make up its own mind and do a much more effective rescue for state and local governments. The Fed will always do a bad job because the Fed isn’t the Treasury. It’s supposed to be the central bank.