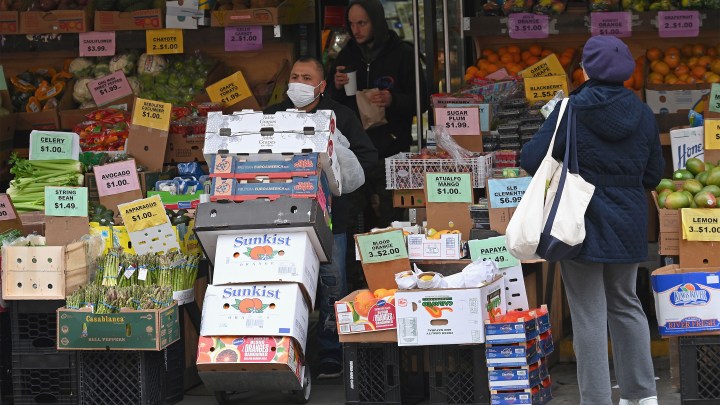 COPY
A worker restocks groceries at a supermarket in Brooklyn in March. The Main Street Lending Program offers loans that would likely be hard for businesses like grocers or cafes to pay back. Angela Weiss/AFP via Getty Images
COVID-19

A worker restocks groceries at a supermarket in Brooklyn in March. The Main Street Lending Program offers loans that would likely be hard for businesses like grocers or cafes to pay back. Angela Weiss/AFP via Getty Images
Listen Now

The Paycheck Protection Program loans are aimed at helping the country’s smallest businesses make it through the pandemic. This week, the Federal Reserve will be rolling out another loan program aimed at larger businesses called the Main Street Lending Program.

When you look at the details of the program, Karen Petrou, managing partner at Federal Financial Analytics, said maybe the name’s a little misleading.

“It’s only the ‘Main Street’ program if the Main Street in your town looks a lot like Park Avenue,” she said.

Businesses with as many as 15,000 employees may apply. Loan sizes range from $500,000 to $25 million. Petrou said that’s not much for a company like General Motors, but it is for small businesses.

“Small grocers, cafes, restaurants, hairdressers, car repair shops — many of them never see a half a million dollars in annual revenue, let alone could pay back a loan that big,” Petrou said.

The program’s more likely to appeal to specialized manufacturers, like software companies and other mid-sized businesses, according to Matt Hetrick, who runs the accounting firm Harmony Group.

He said for some of those companies, borrowing money might make sense in the long run.

“What’s the cost of losing all of that talent or shutting this thing down versus the cost of borrowing some money to get through an expected loss period?” Hetrick said.

Smaller companies may not be able to apply for these loans, but they’ll benefit, said Jeremy Swan at the accounting and advisory firm CohnReznick.

“Let’s just say that you are a small local grocery store. Who are your suppliers? Typically, they’re going to be the medium- and largest-size businesses,” Swan said.

The Fed’s charging more interest than the PPP program, and these loans can’t be forgiven. Businesses will have to pay them off in four years.

Nathan Rogge, president and CEO of the Bank of Southern California, said that’s not enough time for many of his clients.

“These are clients that are clearly in duress. They don’t know where things are going,” Rogge said. “When you give them a loan with such a short amortization, it’s really hard to get comfortable with it.”

Congress appropriated almost $700 billion for the Paycheck Protection Program, but Fed Chair Jerome Powell has said there basically won’t be a limit to this one. The Treasury and Federal Reserve can simply make more funds available.

Since the money won’t run out, Rogge said a lot of businesses are holding off.

“Businesses and banks are in a position of ‘let’s wait and see exactly how this works. I just don’t feel that urgency to have an application in the day that it opens up,'” Rogge said.

In the meantime, he’s been helping clients apply to other federal and state loan programs with longer repayment windows.