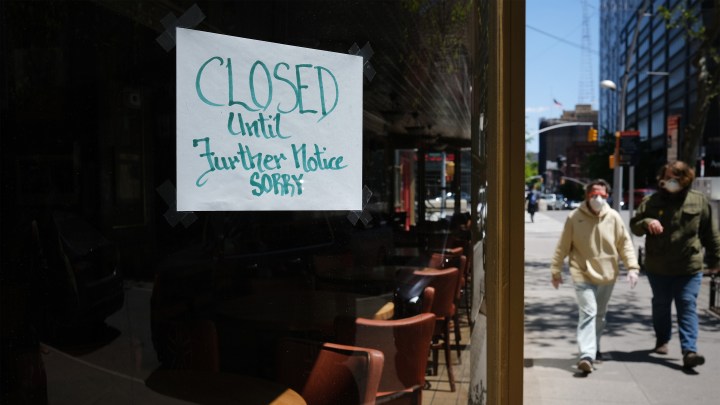 COPY
A shuttered New York City business district in mid-May. Some of the rules that make the PPP confusing for businesses may change. Spencer Platt/Getty Images
COVID-19

A shuttered New York City business district in mid-May. Some of the rules that make the PPP confusing for businesses may change. Spencer Platt/Getty Images
Listen Now

The House is set to vote this week on a bill that would ease many of the Paycheck Protection Program’s rules. Businesses would get more time to spend the money and have the loans forgiven. They’d also be allowed more flexibility in how they spend the money. We checked in with some small-business owners to find out what they think.

Currently, if businesses want their PPP loans forgiven, they have to spend the money in eight weeks.

Tiffany Turner, co-founder of Adrift Hospitality, which runs five hotels in Washington state, said there’s a problem with that.

“The recovery’s going to take a lot longer than eight weeks,” Turner said. “In fact, most of us are still going to be in a crisis when that eight weeks is up.”

Turner said she’s worried she’ll have to lay people off after eight weeks, given how hard the pandemic has hit her industry.

The House bill would give businesses 16 additional weeks to spend their PPP money. Turner said that would go a long way toward getting her loan forgiven, something she was counting on when she took it.

“There’s so much uncertainty about the next 12 to 18 months that taking on any additional debt is just bad business at this point,” she said.

The proposal would also do away with the requirement that businesses spend 75% of their PPP loans on payroll. That would free up money for inventory, rent and other loan payments. Vermont restaurant owner Mark Frier said he needs more flexibility, especially if he gets more time to spend the loan.

“As you extend out the time, we’re going to continue to have those fixed costs of rent and utilities,” Frier said.

If a loan isn’t forgiven, the House bill would extend the time businesses have to pay it off from two years to five. Frier said that would bring down his monthly payments, but they’d still be pretty steep.

If businesses want their loans fully forgiven, they still have to bring back their employee headcounts.

Matt Hetrick runs the accounting firm Harmony Group. He said the extensions would give businesses more time to figure out how to do that.

“You’ll be able to plan, and if you’re not able to get your full forgiveness, you can plan for that,” Hetrick said. He added that these changes would reduce the confusion that’s surrounded the program from day one.

And they would help companies accomplish the goal of the PPP loans: to keep employees working.