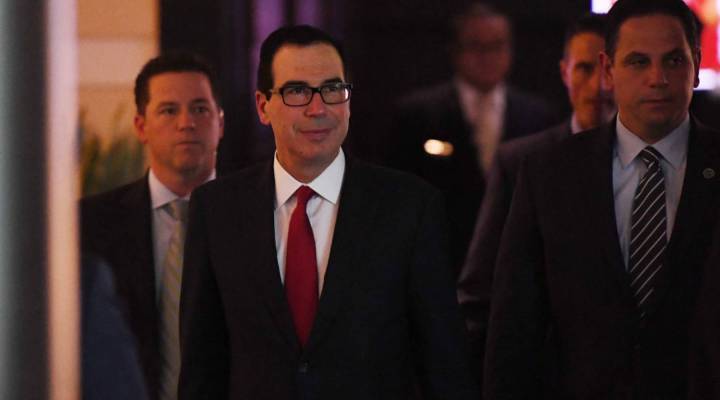 The audio attached to this post features an interview from the “Marketplace Morning Report” with reporter Nova Safo.

Treasury Secretary Steven Mnuchin said Thursday he will not to extend several emergency loan programs set up with the Federal Reserve to support the economy in the midst of the coronavirus pandemic.

The decision drew a terse rebuke from the Fed.

The central bank said it “would prefer that the full suite of emergency facilities established during the coronavirus pandemic continue to serve their important role as a backstop for our still-strained and vulnerable economy.”

But in a letter to Fed Chairman Jerome Powell, Mnuchin said that the Fed’s corporate credit, municipal lending and Main Street Lending programs would not be renewed when they expire on Dec. 31.

Under law, the loan facilities required the support of the Treasury Department, which serves as a backstop for the initial losses the programs might incur.

Mnuchin said that he is requesting that the Fed return to Treasury the unused funds appropriated by Congress for operation of the programs.

He said this would allow Congress to re-appropriate $455 billion to other coronavirus programs. Republicans and Democrats have been deadlocked for months on approval of another round of coronavirus support measures.

In public remarks Tuesday, Powell made clear that he hoped that the loan programs would remain in effect for the foreseeable future.

“When the right time comes, and I don’t think that time is yet, or very soon, we’ll put those tools away,” he said in an online discussion with a San Francisco-based business group.

The future of the Main Street and Municipal Lending programs has taken on greater importance with President-Elect Joe Biden’s victory. Many progressive economists have argued that a Democratic-led Treasury could support the Fed taking on more risk and making more loans to small and mid-sized businesses and cash-strapped cities under these programs. That would provide at least one avenue for the Biden administration to provide stimulus without going through Congress.

Neither program has lived up to its potential so far, with the Municipal Lending program making just one loan, while the Main Street program has made loans totaling around $4 billion to about 400 companies.

Mnuchin’s move comes as the resurgent virus and slowing consumer spending, as well as colder weather that will shut down outdoor dining, will cause more small and mid-sized businesses to struggle with lower revenue and potentially close.

However, Republican Sen. Pat Toomey of Pennsylvania said in a statement that he approved of Mnuchin’s decision.

“Congress’ intent was clear: These facilities were to be temporary, to provide liquidity and to cease operations by the end of 2020,” Toomey, a member of the Senate Finance Committee, said. ”With liquidity restored, they should expire, as Congress intended and the law requires, by Dec. 31, 2020.”