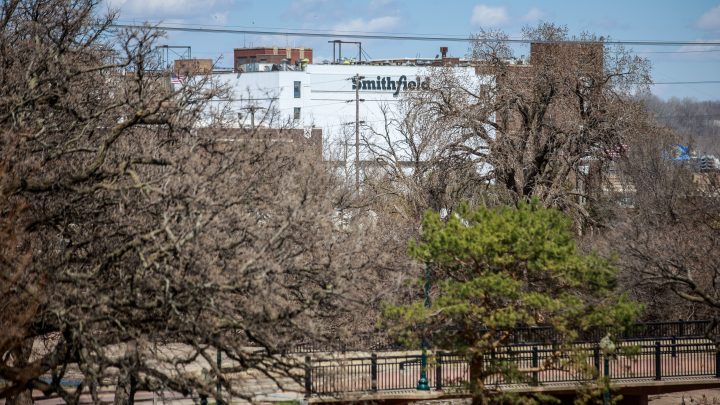 COPY
When the Smithfield Foods pork processing plant in Sioux Falls, South Dakota, became one of the hot spots of the COVID-19 outbreak, Kurt Loudenback, the CEO of Grand Prairie Foods, asked many of his workers to stay home. Kerem Yucel/AFP via Getty Images
COVID-19

When the Smithfield Foods pork processing plant in Sioux Falls, South Dakota, became one of the hot spots of the COVID-19 outbreak, Kurt Loudenback, the CEO of Grand Prairie Foods, asked many of his workers to stay home. Kerem Yucel/AFP via Getty Images
Listen Now

Just down the road from the Sioux Falls, South Dakota, Smithfield pork processing plant that’s been one of the hot spots of the COVID-19 pandemic is a much smaller facility owned by a company called Grand Prairie Foods. Grand Prairie Foods makes eggs and other food that winds up on hotel breakfast buffets as well as packaged breakfast sandwiches and other foods for grocery and convenience stores.

“Marketplace” host Kai Ryssdal visited Grand Prairie Foods back in 2013 and talked with Kurt Loudenback, the company’s owner and CEO. We called him back this week to see how the company is weathering the pandemic. The following is an edited transcript of their conversation.

Kai Ryssdal: Tell me what this thing looked like on the way in for Grand Prairie Foods.

Kurt Loudenback: Well, it’s been quite an adventure out here in the heartland. When things started to unravel back in March across the country, I was on vacation with my wife in South Africa, and we literally landed the week that things were really starting to heat up. We got back home just in time to have about 80% of our purchase orders canceled. Because, as you know, we’re pretty heavily involved in the hospitality and travel industry with our food service operations, and those folks were shutting down very quickly around that time and decided they didn’t need food anymore.

Ryssdal: Yeah, I remember when we were out there a number of years ago, the whole big scrambled egg thing. It was quite the set of machinery. So what did you do? How did you react as you worked to save your business?

Loudenback: Well, we’re still working to save our business, because, you know, you don’t replace 80% of your business overnight. And fortunately, since you’ve been here, we established a second operation that we moved that food service business to. And the plant that you had visited when you were out here has turned into a packaged goods facility. So, you know, as has happened with a lot of people as food service operations wound down, we were able to ramp up the packaged goods business. So that facility is running six days a week, two shifts a day and, you know, we’re really pumping out a lot of stuff to rebuild our business with packaged goods.

Ryssdal: Did you do the whole [Paycheck Protection Program] loan to get some operating cash and sort of tide you over?

Loudenback: We did. We’re very fortunate to have qualified for that. And that, quite frankly, was a lifesaver. This would be a difficult road without that. So we’re really grateful that that opportunity was there.

Ryssdal: I do want to ask you, Mr. Loudenback, about the epidemiology of this thing. Because you are in Sioux Falls as is that big Smithfield pork plant.

Ryssdal: How worried were you when this was starting about your employees? I mean, I imagine probably you have family members of your workers at that pork plant.

Loudenback: Oh, man, that was a rough couple of weeks, I’ll tell you what. Because it was maybe a week or two after we started shutting things down that that happened, and so, we were all just still kind of learning how to deal with this virus and how to keep it out of our facilities and keep people safe. And you’re right — we do share a lot of family members with workers over there. But we had kind of heard rumors early that they were having some issues over there. And so we actually asked any employee who was associated with, lived with, [or was a] close family member with an employee at Smithfield to stay home. And we had them do that for two weeks. So we were fortunate that we did have some of those folks that got positive [COVID-19 test] results, but they weren’t in our facility at the time that that happened. So we were largely able to keep it out.

Ryssdal: So in, say, a year, what’s business going to be like at Grand Prairie Foods?

Loudenback: Yeah. So, as I stated earlier, we lost about 80% of our business on day one. We’ve recovered probably close to half of that with other packaged goods. And, you know, we feel optimistic that within the next six to 12 months, we’ll be doing OK. We’re not going to be doing as well as we were before with full operations going, but we feel pretty good about where we’re going with our business.