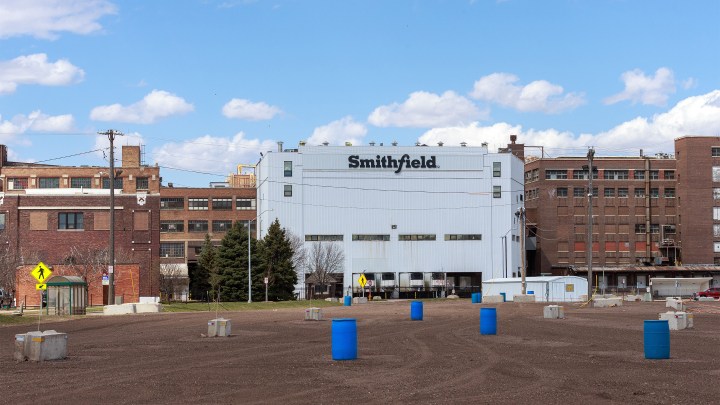 Sioux Falls: The economic center of the universe

COPY
People come from all over the world to Sioux Falls for work. Above, the Smithfield Foods pork processing plant in Sioux Falls, South Dakota. Kerem Yucel/AFP via Getty Images
American Futures

Sioux Falls: The economic center of the universe

People come from all over the world to Sioux Falls for work. Above, the Smithfield Foods pork processing plant in Sioux Falls, South Dakota. Kerem Yucel/AFP via Getty Images
Listen Now

Sioux Falls, South Dakota, is the center of the economic universe.

While that may not be entirely true, the economic footprint of Sioux Falls is bigger than you may think. As part of our “American Futures” project, with The Atlantic’s James Fallows, we’re exploring the dynamic and resilient economy in small towns across the United States. And we’re starting in Sioux Falls.

If you want to talk about the global impact of Sioux Falls, or even to get a snapshot of the town’s economy (population 160,000), it might be more appropriate to start at your local grocery store.

In the frozen foods section of Whole Foods, Ralph’s and Kroger, next to the waffles and egg burritos, you’ll find a frozen egg sandwich with the brand Start Healthy. That sandwich is assembled and packaged in Sioux Falls by a company called Grand Prairie.

Grand Prairie owner and CEO Kurt Loudenback gave us a tour of the factory floor. The company’s range of products is one reason you might never have heard of them. The breakfast sandwiches will be marketed under Grand Prairie’s own label but that’s only a small slice of their business.

The 100,000 pounds of scrambled eggs that will be packaged in the factory this week will be sent to national hotel chains, served as part of a continental breakfast. The sausages will be packaged under other labels and found in any grocery store. The bread bowls will go to school districts across the country.

Loudenback describes the company’s launch to national distribution as serendipitous, starting with a neighbor that owned some hotels.

“I was mowing the grass one day and [my neighbor] stopped his car and said, ‘Hey, how are ya doing?’ and I said, ‘Great. Hey do you know anyone at Marriott or Hampton Inn that I can connect with?'” Loudenback said.

Grand Prairie has about 85 employees, which means they’re still small compared to other food manufacturers. But they’ve grown steadily in the 10 years since Loudenback and his wife Valerie first bought the company. Their continued growth is another big part of what’s fueling the Sioux Falls economy — a stream of good, steady jobs.

And there’s something else — those jobs don’t require English. The Loudenbacks employ immigrants and refugees from all over the world at their facility. And in Sioux Falls, that’s not surprising.

Starting in the 1940s, and increasingly since the Vietnam War, Sioux Falls has been a prime relocation center for Lutheran Social Services, an agency that provides social services for displaced populations and refugees. Sioux Falls is ideal because there are plenty of jobs — the city boasts a 3 percent unemployment rate.

Today, there are over 60 languages spoken in the local school district, including Spanish, Nepali, Swahili, Amharic, Somali, Ukrainian and Vietnamese.

Meanwhile, the parents work at factories like Grand Prairie or John Morrell — the local meat packing plant own by Smithfield. They earn wages as they help create products that are sent around the country.

Which is why, whether you realize or not, Sioux Falls reaches into your local Whole Foods, the Los Angeles Unified School District and a Hampton Inn in New England.