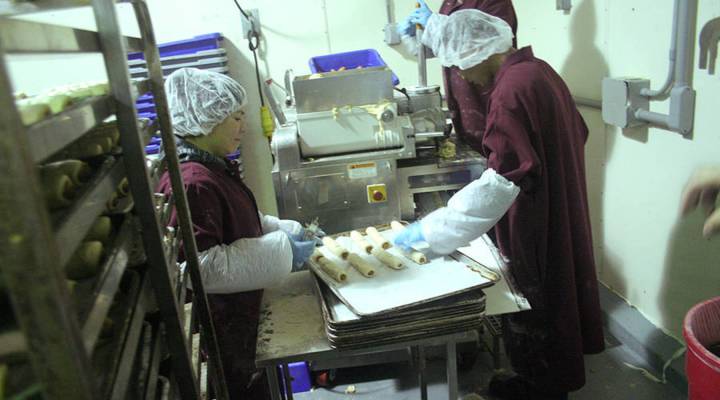 Grand Prairie Foods in Sioux Falls, South Dakota, maker of microwavable sandwiches, prepackaged scrambled eggs for hotels and other convenience foods, relies on immigrant refugee labor. The unemployment rate in Sioux Falls is under 2.5 percent, and Grand Prairie Foods owner and CEO Kurt Loudenback says it can be tough to find workers. Marketplace host Kai Ryssdal met Loudenback when he visited their factory in 2013 as part of the American Futures series with Jim Fallows from The Atlantic. He recently checked back in to ask Loudenback what he thinks about the current rhetoric in national politics about refugees. Below is an edited transcript of their conversation.

Kai Ryssdal: We were out in Sioux Falls, gosh almost four years ago now I guess with Jim Fallows. Things were going well for you. You were looking for growth. How has it been the past three years?

Kurt Loudenback: Well it’s been really good for us. In fact, I’m proud to say that we have doubled our business since then and actually just about doubled our workforce as well. So things have been good for Grand Prairie Foods.

Ryssdal: Well, since you mentioned the workforce, that’s kind of the real reason we called, because as I remember from being out there with you, the workforce in Sioux Falls, and yours specifically, is really heavily immigrant-based, right? I mean, you need a flow of immigrants to get your products out.

Loudenback: We do, in fact. We have about 175 total employees today. And of that, roughly 120 of them are either immigrants or refugees.

Ryssdal: So what are you looking at when you see the current political environment and the word coming out of the White House?

Loudenback: Well, I have to tell you that we’re somewhat concerned about that. Immigrant and refugee labor are folks that are interested in a new life, and they’re interested in entry-level positions, not only in our type of business, but in many, many businesses across the country. So I have to say, we’re a little bit concerned about some of the rhetoric that we hear relative to those sources of labor. It seems like there’s an environment of more restriction, and we’re kind of cautious about that at this point in time.

Ryssdal: So what’s the plan? Because a constraint on legal immigration in this country with refugees and others is literally a constraint on your business growth, right?

Loudenback: I have to say that it potentially will be. You know, we’re keeping an eye on the environment. We watch it closely. We’re starting to talk about what potential alternatives will there be if we’re not able to find the labor that we need to continue to grow our business, and in most cases that means automation.

Ryssdal: Yeah, but I’ll tell you what I remember, actually: I have vivid memories of going to your plant in Sioux Falls, and it was loads of frozen scrambled eggs that have to get put into cartons in containers. Is that automatable work?

Loudenback: Some of the work is not automatable. A part of our business that has grown substantially is sandwich building for the food service world. And that’s a very manual process. It’s difficult to automate putting a piece of sausage on a sandwich.

Ryssdal: Yeah, I can’t quite conceive of how that would work, actually.

Loudenback: You know, there are companies that are trying, but so far the technology that we have seen is very expensive, and we’re concerned about how reliable it may be.

Ryssdal: Give me the bigger picture in Sioux Falls and in that part of the country. How are folks feeling about the macro economy?

Loudenback: I would say people feel pretty good about it. We’ve done well for many, many years as you noted. And I think at that point in time when you were here in 2013, the area unemployment rate was in the 4 to 4 1/2 percent range, which was well below the national average. Today, we’re in the 2 to 2 1/2 percent range. So the economy continues to grow, and there’s been lots of investment. And so I would say that people in South Dakota feel good about the current economic environment.

Ryssdal: That is Kurt Loudenback, owner and president of Grand Prairie Foods. We talked to him a couple of years ago out in Sioux Falls, South Dakota. Kurt, thanks very much.