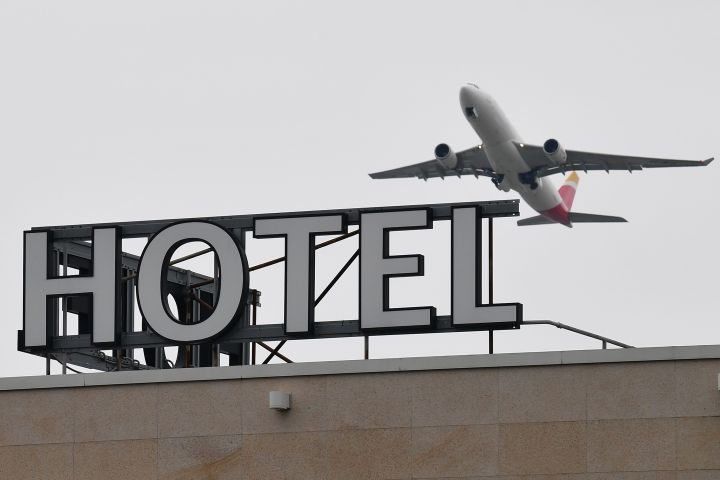 COPY
As travel demand bounces back, Kurt Loudenback, CEO of a company that makes hotel breakfast food, is optimistic that his business will return to pre-pandemic levels. Justin Tallis/AFP via Getty Images

As travel demand bounces back, Kurt Loudenback, CEO of a company that makes hotel breakfast food, is optimistic that his business will return to pre-pandemic levels. Justin Tallis/AFP via Getty Images
Listen Now

Kurt Loudenback, the CEO and co-owner of Grand Prairie Foods in Sioux Falls, South Dakota, employs a couple of hundred people in one of the tightest labor markets in the country.

South Dakota is one of four states (along with Nebraska, Utah and Vermont) with an unemployment rate just under 3%. As a maker of precooked eggs, breakfast sandwiches and other packaged foods mostly for hotels and convenience stores, Grand Prairie Foods is also inextricably linked to the hospitality sector, which was among the industries hit hardest by COVID-19.

Loudenback spoke with “Marketplace” host Kai Ryssdal about pent-up demand, vaccinating employees and what South Dakota’s tight labor market means for his company. The following is an edited transcript of their conversation.

Kai Ryssdal: So we spoke to you last June, and one of the things you said, I asked, as I was asking everybody back then, how long do you think this is gonna last? And how long till you’re back to normal? And you said, “Oh, I don’t know, six to 12 months.” So here we are at the eight-, nine-month mark. How you doing at Grand Prairie Foods?

Kurt Loudenback: Well, I think we’re going to get back to normal within my predicted period of six to 12 months. We’re not there yet, but just hearing tremendous feedback and reports from my customers that bookings are up significantly for the summer months.

Ryssdal: What I hear you saying, but not using the actual words is “pent-up demand,” right? There’s business travel, there’s personal travel. I mean, we should, we should remind people, what you do is, and this is the thing that sticks in my mind about that visit we had with you out a number of years ago, the big egg machine where you make those prepackaged eggs that that go in, you know, self-serve containers in hotels and buffet places, right? You’re banking that’s coming back in a hurry?

Loudenback: Yes, I am. I don’t think it’ll come back to the degree it was pre-pandemic because what I’m finding is that a lot of customers in the hotel business that have gotten away from the breakfast buffet aren’t in a real hurry to get back to it. But fortunately, we do a lot of prepackaged items like sandwiches and the like that many of those hotels have shifted to, and that business has gone nuts for us right now.

Ryssdal: Well, that’s good. Now, it takes people to get all those foods into those packages. Talk to me about the hiring situation, because [South Dakota], as you surely know, has [one of the] lowest unemployment rates in the nation.

Loudenback: Yeah, we’re back down, but as you probably recall, my wife runs the [human resources] department here at Grand Prairie Foods, and she’s done an incredible job with her team to find and hire people we need to expand with our business. So, it’s not easy, but we’ve not had any trouble filling production spots.

Ryssdal: One of the reasons we wanted to talk to you is because we were interested in talking to a businessperson who is dealing with vaccinating his or her employees, and you had your staff all set up [to get vaccinated], but lo and behold, it was [going to be] Johnson & Johnson, and we know how that’s gone. What are you going to do?

Loudenback: Well, we’re still doing it, except now we’re going to do two. A local hospital’s coming in, and they’re going to administer the vaccine to as many employees who are willing to do it, and then they’ll come back in roughly 30 days and do it all over again.

Ryssdal: You’re not going to require it of your employees?

Loudenback: We are not. We debated that significantly. We just decided at the end of the day to just roll with it and take voluntary sign-ups. And we’ll have well over half of our workforce will have been vaccinated, maybe approaching 60%, which I think is fairly consistent with what I’ve been hearing in terms of polling on a national basis.

Ryssdal: Let me ask you one more labor force question, and that is about just paying people more. I mean, one of the things, as you know surely, that the [Federal Reserve] is worried about and a lot of economists are saying they’re worried about, is inflation, wage inflation as the labor supply sort of heats up. Granted there are 8 million fewer jobs in this economy, but I wonder if in a place like Sioux Falls with such a tight labor market, you just got to, you know, cowboy up and pay people more?

Loudenback: Yeah, I think it’s going to affect our wage scale. Seems like we’re getting more businesses here, which continues to exacerbate that issue, so I fully expect that we’re going to experience wage inflation as a community and at our company as well. We just have to do it. You know, we can’t stop making food.

Ryssdal: That’s right. Last thing, and then I’ll let you go — and I’m going to get back into the prediction game whence we started. Even if you’re not going to get back to where you were because of the changes that your customers have made, do you suppose if we call you in another eight months, you’ll be back to where you were revenue-wise, production-wise, workforce size-wise?

Loudenback: You know, I can’t really predict the future, but we feel pretty optimistic about 2021, that we’ll get back to pre-pandemic levels.