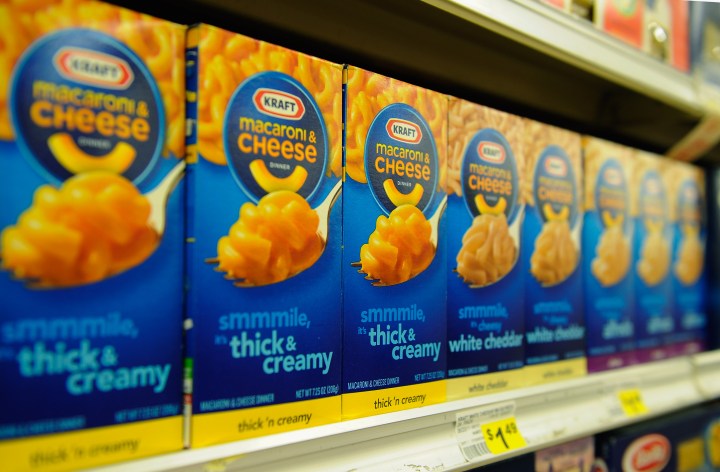 COPY
Demand for Kraft Macaroni & Cheese has surged this year as Americans are cooking more and eating at restaurants less. Kevork Djansezian/Getty Images

In a recent promotion, the processed food company Kraft Heinz announced that it would replace the word “dinner” on limited edition boxes of Kraft Macaroni & Cheese with “breakfast.” The company said 56% of parents reported feeding their children macaroni and cheese for breakfast in a survey of 1,000 parents it conducted.

But the evolution of boxed macaroni and cheese as a breakfast item is just one more chapter in the history of a food that’s held a special place in American pantries for generations.

“Macaroni and cheese is a very old food,” said Jeffrey Miller, a food historian and associate professor of hospitality management at Colorado State University who recently wrote an “ode to mac and cheese” for “The Conversation.” “It’s been in American cookbooks since Colonial times,” he said.

Kraft Foods introduced boxed macaroni and cheese during the Great Depression, but Miller said the product really took off during World War II.

Miller argues that macaroni and cheese and other processed foods also played an important role in women’s liberation by freeing them from hours of cooking. “Processed foods were considered a blessing by a lot of people,” he said. “Women, as a result of processed foods and convenience foods, were able to enter professions [and] have more hobbies.”

Despite the health food movement that’s given processed foods a somewhat negative reputation in recent years, Miller said he thinks they’ll remain a staple of American cooking. “We like to curse processed foods,” he said. “But we usually do it with a mouth full of them.”

This year, with more consumers eating at home and stocking up on pantry items due to the pandemic, demand surged for Kraft Macaroni & Cheese.

“A lot of us had our lives upended by the coronavirus, and I heard a lot of people say that, ‘Oh, isn’t this great? Americans are getting back to cooking, and they’re gonna appreciate home-cooked food’ and I just don’t think that’s true,” Miller said. “We still want the convenience that goes with somebody preparing our food for us, and that happy medium right now is macaroni and cheese.”