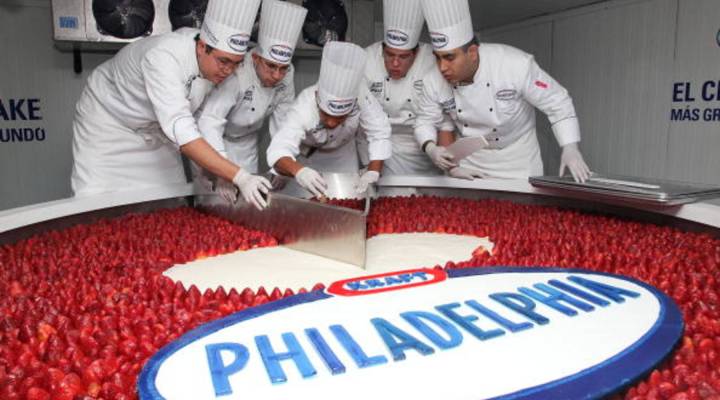 Cream cheese bricks come in handy when making a cheesecake, but the foil packaging is not exactly reusable. Victor Chavez/Getty Images

Why does cream cheese come in packaging that is so difficult to reuse?

Kraft does sell cream cheese in plastic tubs; some U.S. supermarkets carry both packagings. Typically, flavored cream cheese comes in a plastic tub while the plain classic cream cheese is most often found wrapped in a foil. The plastic containers are easier to reuse after opening than the tin foil packaging.

In the United Kingdom, Philadelphia Cream Cheese is only sold in plastic containers. The company’s global arm, which is now a separate company known as Mondelez, only sold cream cheese in tin foil between the 1960s and 1980s. On the history page of its U.K. website, the cream cheese manufacturer notes that between the years 1977 and 1985, new packaging was introduced along with new flavored and low fat cream cheeses.

“The fiddly foil packages are replaced with a handy tub,” according to the site.

To find out why cream cheese was packaged in foil in the first place, Marketplace reached out to Jeff Marx, a rabbi and a cream cheese expert.

“Cream cheese is a very soft cheese. It has to be wrapped for it to maintain some type of form,” explained Marx. Back in 1877, William Lawrence was manufacturing cream cheese at his farm in Chester, New York. To wrap his cheese, he used 3-by-4 inch square-like forms and manila tissue paper that Marx described as a firm piece of paper.

“Up to this time, almost all cheese was produced in round hoops, but when you are packing smaller cheeses in a box to ship them, you can pack more cheeses in square form than in a round form. This is one of the key moments in manufacturing where product’s shape changes for various production reasons.”

In 1880, Lawrence was approached by Alvah Reynolds, who wanted to distribute the cream cheese produced by Lawrence.

“Reynolds is a marketing genius. He says to Lawrence: ‘You need a name for your cheese.’ Because up till now, you just got a cheese in a box that says ‘sold by Lawrence.’ So Reynolds says, ‘Let’s give it a name.’ And he says: ‘Look, Philadelphia has a reputation for fine cheeses. It has for a long period of time. Let’s call it a Philadelphia cheese, and let’s put the name on the cheese wrappers,” Marx said. Reynolds also suggested that they use tin foil, which would be easier to imprint. The two men do exactly that. “And from then on, Philadelphia’s cream cheese has this signature form wrapped in tin foil with Philadelphia cream cheese printed on the top.”

Why a burger at Carl’s Jr. may be the same at Hardee’s