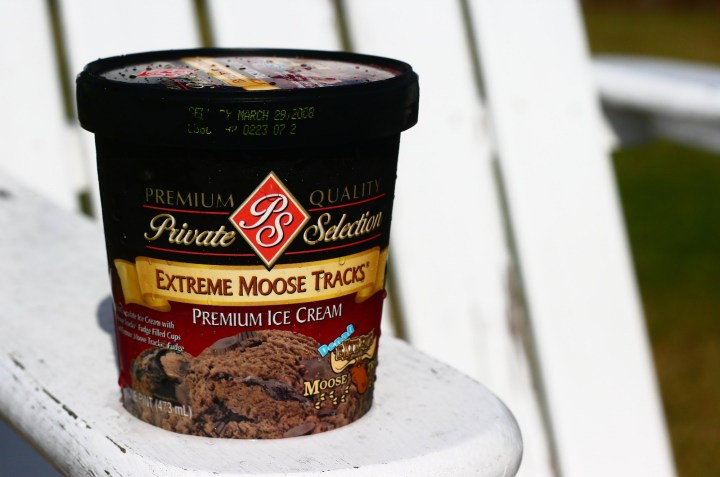 The Moose Tracks ice cream flavor is made by many brands, but always to strict specifications. LRD615/Flickr
I've Always Wondered ...

The Moose Tracks ice cream flavor is made by many brands, but always to strict specifications. LRD615/Flickr

Why, no matter which brand of Moose Tracks ice cream you buy, the “Moose Tracks” logo is the same? Apparently that’s because the company that owns the trademark licenses it out to different brands. But how does that model work there and seemingly nowhere else? In the cereal world, you don’t see Kellogg’s-licensed Froot Loops produced by all brands. Instead, their competitors just sell “Fruity O’s” or “Fruit Spins.”

When it comes to the products you see on grocery shelves, there might be a whole backstory involving trademark licensing deals.

Like Breen observed, you can find Moose Tracks ice cream from a variety of companies, including Hershey’s, Kemps and Belmont. Moose Tracks is sold in over 100 brands across the country, Jon Vander Woude, VP of marketing at Denali Ingredients, said via email.

As Moose Tracks explains in its online FAQ, it does not make its own cartons of ice cream. “We actually license the recipe to our dairy partners to produce and manufacture on their own,” the website reads.

“Denali Flavors, the creators of the Moose Tracks line of flavors, was originally a flavor company serving independent dairies. The idea was to arm these smaller independents with flavor concepts that would allow them to compete in the ever-growing segment of indulgent ice cream,” Vander Woude wrote. He defined “indulgent” as having multiple “inclusions” like “bits and pieces and/or swirls of fudge, caramel, etc.”

While you do see other companies manufacturing food lines that seem to mimic well-known brands (like Fruity O’s versus Froot Loops, for example), licensing a recipe is not “super unique” within the industry, according to Cliff Kuehn, an international trademark and copyright attorney.

For instance, several cookie and candy companies have licensed their names to other companies, which is why you might see Oreo or Butterfinger ice cream with a trademark.

Kuehn said businesses like Moose Tracks are protecting their names.

“They’re not licensing the recipe, exactly, in a legal sense. In a legal sense, they have a trademark, the trademark is Moose Tracks, and that’s protection for the word in connection to ice cream or ice cream recipes,” Kuehn said. “They couldn’t stop someone from reverse engineering the recipe and just making it and calling it something else.”

“They’re essentially renting out their brand and their flavor recipes,” Cross said.

Vander Woude said Denali will talk to anyone who’s interested in using Moose Tracks in their wares, but it has “strict guidelines on licensing production.”

“To put the Moose Tracks logo on pack means you have committed to using only real Moose Tracks fudge (a very secret recipe) made by Denali as well as using only the peanut butter cups we specify,” he wrote.

One advantage of licensing is that it can take tens of millions of dollars to build a food brand from scratch, according to Cross.

“Let’s say we’re going to do Bill Cross ice cream. No one’s ever heard of me, I don’t have an ice cream pedigree. So I would have to spend literally a large fortune to get my product developed, get it into retailers,” he said.

To get the product on shelves, a company has to pay “slotting fees” to the grocery store, may run about $1 million per chain, according to Cross. In turn, by becoming a licensee, the maker gains brand recognition for its goods.

“No need to necessarily market the product. Consumers see it on the shelves, they recognize the brand and then they purchase it,” Cross said. “And then you are just paying the brand owner a royalty.”

A license can come with baggage

Beyond paying that cost, however, Kuehn noted that licensees could encounter problems. It could be challenging to meet the licensor’s quality control standards or, on the other hand, deal with a licensor’s troubles.

For example, if the CEO of a company were involved in a scandal, it could damage your ice cream’s reputation if it was named after that company, he explained.

Kellogg’s, for instance, is currently embroiled in labor issues. More than 1,000 workers are on strike, calling for better working conditions and pay and protesting threats to outsource jobs.

People have gone online to encourage a boycott and listed all the products associated with the brand, although there is no official boycott at the moment.

Cross said you also might have trouble getting the brand to license its name in the first place because it fears consumers won’t like the product, which would “harm the brand.”

And sometimes a product that appears to be inspired by another brand might actually be manufactured by that company when it has excess capacity, Cross said.

“You don’t have hundreds of cereal factories. You have a handful, and many of them are either owned by or contracted to the big names like Kellogg’s and General Mills,” Cross said.

As Breen pointed out, there are plenty of imitators. Malt-O-Meal, although it was renamed MOM Brands and acquired by Post Holdings, carved out its own niche by selling cereals with names that resembled its more popular peers. Tootie Fruities, for example, bears similarities to Froot Loops.

As for why these companies can have such similar names, Kuehn said it’s related to a legal standard known as likelihood of confusion.

“So if a later mark is likely to confuse consumers with the earlier mark, that’s when you have a problem,” Kuehn said. “Now, how do you define that? Well, that’s why I have a job. This type of thing is litigated over and over and over.”