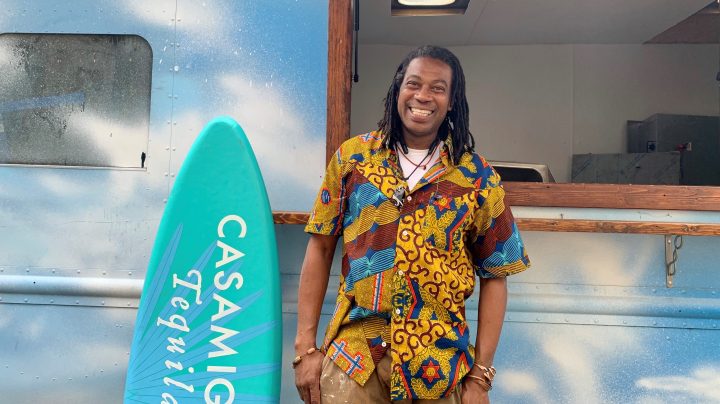 COPY
Terence Dickson stands in front of "Big Blue," a delivery truck he's converted into an outdoor bar at his restaurant in Baltimore. Amy Scott/Marketplace
COVID-19

Terence Dickson stands in front of "Big Blue," a delivery truck he's converted into an outdoor bar at his restaurant in Baltimore. Amy Scott/Marketplace
Listen Now

On a recent Friday afternoon, the city of Baltimore, Maryland, was just minutes away from letting restaurants reopen for outdoor dining. But Terence Dickson, owner of Terra Cafe, was holding off. The cafe has the perfect space for outdoor dining out back, with canvas shades hanging overhead and an old delivery truck serving as the bar. But instead of preparing to welcome back customers, Dickson was balanced on a pile of furniture behind the truck.

“What we’re doing right now is we’re getting ready the proper way for reopening,” he said.

That meant installing special paneling inside the truck/bar that’s easy to disinfect, ordering touchless digital thermometers to screen customers and setting up hand sanitizer stations. Dickson admitted he was tempted to open that evening.

He’s worried about liability, for one thing. He wants to see if there’s a surge in COVID-19 cases before making a decision, even if it’s costing him. Dickson has had a small but steady stream of takeout customers, picking up jerk chicken and fish sandwiches, but it’s not enough to pay the bills.

“It’s a little devil on my shoulder saying, ‘Get the bread, get the bread,'” he said. “The angel’s going to win out over this.”

Dickson had applied for funding from the federal Paycheck Protection Program, only to be told initially that he didn’t qualify because he didn’t have an existing line of credit with his bank. His restaurant was one of many minority-owned businesses left out of the program in the first round.

Eventually Dickson received $38,000, of the $65,000 he requested. Then came the next challenge. In order to get the loan forgiven, he had to spend 75% of it on payroll. There still isn’t enough business to bring back all his workers, so he’s found ways to give some of them extra hours.

Dickson’s been able to hold on, but he’s worried about other Black-owned businesses that didn’t get any government help, in some cases because they didn’t apply.

“They’re so traumatized by the relationship that they’ve had before with the banks,” he said. “‘Why do I spend three days filling something out? Why do I got to call? Why do I put false hopes up?'”

A longtime mentor to fellow Black entrepreneurs, Dickson is now seeking funding to start an incubator for micro businesses, hoping the renewed focus on systemic racism and economic inequality in our country will bring change.