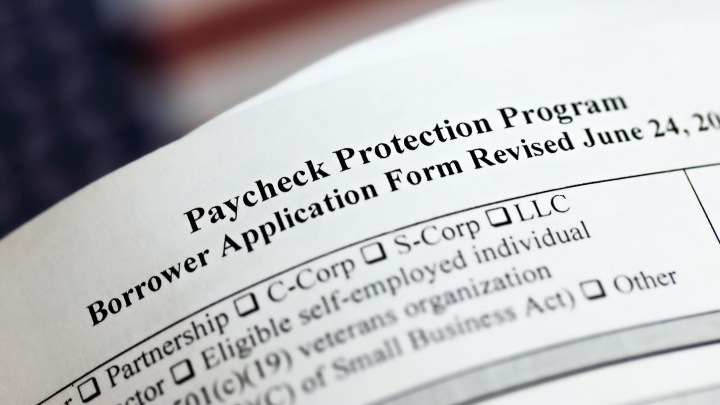 COPY
Though PPP program helped many small businesses stay afloat and pivot during the pandemic, some business owners are still anxious about the future. Ivan Martynov/Getty Images

Though PPP program helped many small businesses stay afloat and pivot during the pandemic, some business owners are still anxious about the future. Ivan Martynov/Getty Images
Listen Now

The Paycheck Protection Program landed back in the news last week after it emerged that a number of Republican members of Congress who criticized President Joe Biden’s student loan forgiveness order had taken out PPP loans and had them forgiven.

It took a while for Sherard Duvall to get a PPP loan for his video production company in South Carolina, OTR Media Group. The company finally got its check in July 2020 — four months after submitting its first application.

Back then, Duvall said that he used the money to pay workers and settle bills.

“That freed up our ability to go ‘OK, now that some of that debt is gone, let’s look at recalibrating selling and advertising, let’s look into doing a website’,” Duvall said in 2020.

By the time he got the loan, Duvall’s video production work had dried up. So the company started a new line of business: setting up live-streaming equipment in home offices, businesses and churches.

Duvall said that business has been doing great ever since.

“Almost every week, we were either doing an install, or we were doing a training, or we were sending a crew out to an office or hiring a crew to go somewhere,” Duvall said.

Meanwhile, video production work has come back, so Duvall has been expanding the company. In May — almost two years after getting his PPP loan — Duvall took out a small business loan to purchase video equipment to help the company meet demand.

“Had it not been for the success we’ve had since the pandemic, I would not have gotten that loan in May,” Duvall said.

Duvall also hired more staff, and he wants to build out some office space. Now, he’s preparing to take out yet another loan.

“We may have to purchase a place, or we may have to put down a large enough amount in advance on a leasing space so that we can make adjustments to the physical space on the inside,” Duvall said.

The pandemic forced a lot of businesses to evolve.

“People sat literally almost shoulder-to-shoulder, with people they’d never met before, for two and a half hours, eating the same thing at the same time,” Pomeroy said. “That was super fun, but I couldn’t see a way forward with that for quite a while.”

Pomeroy closed the restaurant and used her PPP loan to pivot into a new business: Ripe Cooperative sold meal boxes that people could cook at home, along with pastas, sauces, and salads.

Then, in the spring of last year, restaurants started re-opening. “As soon as people started getting vaccinated, I was having a lot of FOMO, honestly, with my friends, who had these big outdoor patio spaces,” Pomeroy said.

Last November, Pomeroy turned Ripe Cooperative into a cafe. She used some of her leftover PPP money to expand her own outdoor patio.

Pomeroy said she likes that the cafe is a lot less exclusive than her old restaurant. The challenge, she said, has been turning a profit.

“Now, the model is very, very different, because it’s a cafe, and we have a lower check average,” Pomeroy said. “So it’s busier feeling to us, but it’s making a little less money, actually.”

Turning a profit has been especially challenging for restaurants because costs are up throughout their supply chains.

“We’re at the end of that, and so we see all those increases by the time we purchase the products,” said Mark Frier, who owns two restaurants in Vermont. “And then we have to turn around and try to make a profit. It’s tough right now.”

Frier used to own a third restaurant, along with a music venue. He said his PPP loans kept all three of his businesses alive, early in the pandemic. But late last year, between higher costs and new COVID variants, he closed the restaurant and music venue.

“That music venue had been there for 50 years,” Frier said. “And I felt terrible being the one to close it. But there was really no other option. We were still carrying the cost of that space, even though we weren’t able to make a dollar in it.”

Frier said the outlook for his remaining restaurants is pretty grim. He said he can’t keep raising prices to cover costs. Meanwhile, it’s been difficult to find workers, so he has to close his restaurants one day a week.

“We would love to get back to a seven-day-a-week,” Frier said. “We can’t seem to figure it out with staffing, so we continue to remain closed for a day.”

That means he has to cover all of his expenses for the week in just six days, instead of seven.