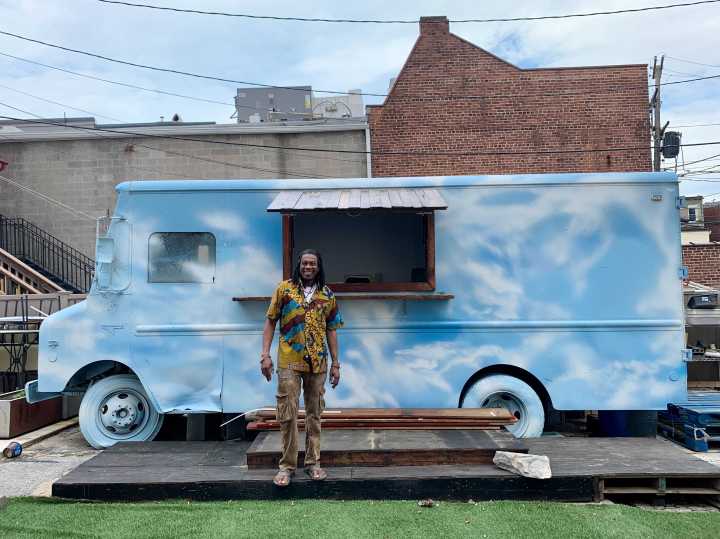 COPY
Terence Dickson stands in front of "Big Blue," a delivery truck he's converted into an outdoor bar at his restaurant in Baltimore. Amy Scott/Marketplace

Terence Dickson stands in front of "Big Blue," a delivery truck he's converted into an outdoor bar at his restaurant in Baltimore. Amy Scott/Marketplace
Listen Now

The pandemic has been devastating for small businesses, and that’s especially true for Black-owned businesses, which were disproportionately shut out of Congress’ Paycheck Protection Program in the spring.

Terence Dickson, the owner of Terra Café in Baltimore, was initially told he didn’t qualify for a PPP loan. He eventually did receive a loan through the program, which is one of the reasons he’s been able to remain open for takeout service — along with his partnership with World Central Kitchen, a nonprofit working with local restaurants to distribute food to those in need.

But Dickson says many Black-owned businesses have been left behind during the pandemic. That’s why he launched Terra Loft Consulting, an incubator for Black micro businesses to help ensure they don’t lose out on funding in the future.

Marketplace’s Amy Scott spoke with Dickson about Terra Loft Consulting and his work distributing food in Baltimore. The following is an edited transcript of their conversation.

Amy Scott: I know you’ve been working with an organization called World Central Kitchen to distribute meals to people in need. How does that partnership work?

Terence Dickson: It was a godsend — when they said that they needed us to help share meals in Baltimore City with people that might be hungry or might need a meal, I was in. And then they told me they’re gonna pay me too? I was blown away.

Originally our staff, before COVID, we were about 24 people. When COVID came, I had to furlough four people because of health reasons and age. But with the World Central Kitchen, I’ve been able to keep all my staff. The loaf has gotten smaller. The loaf has gotten smaller, it’s a real skinny sandwich — but everybody’s eating. Not 40 hours, now you’re getting 15, 20 hours, sometimes 25. But World Kitchen has definitely helped us fill in the blanks, and at least keeps the doors open.

Scott: So what’s on the menu for Thanksgiving this year?

Scott: You’ve mentored a lot of other Black entrepreneurs over the years, some of them right on your block there on St. Paul Street here in Baltimore. How are they doing? What are you hearing from some of the folks you’ve worked with?

Dickson: It’s gotten to the point now that we’ve actually launched Terra Loft Consulting, which is an incubator for micro Black businesses. You know, we’re helping people with their COVID plans now, and also preparing them because we know that, guess what? The city, the state, the federal government is going to have to help these small businesses. So what we want to do is we want to make them in the right situation — that they have all of those things that might be needed for a grant. Or even if, like I’ve shared with a few businesses, guess what? We might have to try to get a little small low interest loan.

There are a few places in town that are being very kind and they have patient capital for small businesses, but one of the big things that you find in my community with Black businesses is trust. If you’re in business, and you’re putting your money in a bank for the last five years, and it’s almost like the world is coming to an end, and every time you turn on the news or the radio you hear that there’s a grant, but you never get it, you kind of stopped trusting on that. It’s an emotional roller coaster you don’t want to ride.

Scott: Well, and along those lines, there has been a huge amount of interest in Black-owned businesses recently, since the police killing of George Floyd and the national reckoning, really, about systemic racism. Are you seeing real action come out of that?

Dickson: You know what, that’s the challenge. I’m so happy you use that word — no, we haven’t seen any action. And that’s one of the key things that I’m hoping I can, you know, bring some light on it and find some help for folks. Because we’re gonna have to change the way that we kept score before. It doesn’t work. It doesn’t work right now. So if people are actually going out and keeping their businesses open, keeping their community encouraged, we got to make sure that they get some funding; we got to make sure that they stay open. Because if not, six months, nine months from now, businesses are going to be closed, or if some are open, they might be so heavy in debt they’re going to close. So I mean, now is action time.

Scott:  Can you say more about what you mean by “we’ve got to change the way we keep score”?

Dickson:  Well, one of the things is that, when all this happened and I applied for the PPP —

Dickson: Exactly. I did all the right things: business bank account, proper license, insurance, all of those things that they needed, but the only problem was I didn’t have a relationship with the bank. And so at that point, guess what, I didn’t qualify. They didn’t care that I employed 24 people, they didn’t care that the cafe was open for 11 years, and was a real rock for the community itself here. So that’s what I’m talking about changing the narratives. They have to look at the people. That if you don’t save this business, guess what happens? Now the city, now the state, and now the federal government is responsible for 20 families. See, I want to do my job. I want to provide jobs for my community. But guess what? I need help.