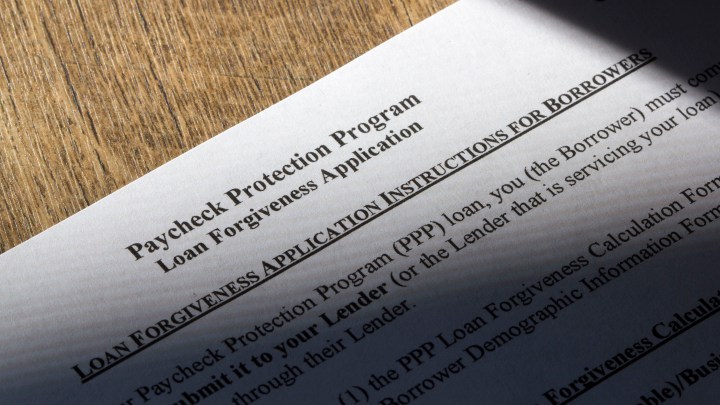 COPY
Applications have to go through community banking organizations — no big banks, for now, at least. hapabapa via Getty Images
COVID-19

Applications have to go through community banking organizations — no big banks, for now, at least. hapabapa via Getty Images
Listen Now

This is the week a new round of Paycheck Protection Program loans became available for pandemic-ravaged businesses. These loans don’t have to be paid back if rules are met.

Right now, loans are open for first-time applicants. And the application has to go through community banking organizations — no big banks, for now, at least.

The way this round of the PPP is rolling out is designed to help business owners like Terrika Walker.

“I’m basically hoping that I won’t have to close my business,” Walker said.

Walker runs a home health care business in New Orleans that did not get a PPP loan the first time around.

“And I’m just praying and hoping that everything goes right this time around,” she said.

In the first round of PPP, back in the spring, applications from Black-owned businesses were 2 1/2 times more likely to be rejected than those submitted by white-owned businesses, according to reporting in Vox.

The community banking organizations that were given the monopoly on taking in applications at the start of this round didn’t want that to happen again.

“So we’re a little bit anxious about making sure that the technology is in place, to make sure everyone gets served,” said Dominik Mjartan, CEO of South Carolina’s Black-owned Optus Bank. “We updated our phone systems, we’ve hired more people. I mean, we’ve done everything possible to make sure we don’t miss an opportunity to help someone.”

Last year, during the first rollout the Small Business Administration’s online system crashed. Bankers had to resubmit applications over and over.

And Robert James II, at the Black-owned Carver State Bank in Georgia, was worried there would be technical glitches again.

“The problem that we have is that there’s a brand new technology system that we’re supposed to use to submit those applications to the SBA, and we didn’t get that information until late last night,” James said.

By Monday afternoon, Mjartan’s Optus Bank in South Carolina had taken in 25 applications. Five have been completed, he said.

Many of the new applicants were new customers.

“What I’m pleased about, just looking at the businesses and talking with them, a lot of them are minority- and women-owned businesses, and they are finding us from out of area,” Mjartan said.

Which was precisely the point of giving community banks first dibs at processing the earliest applications for this new round of PPP loans.